The Empire of Necessity - by Greg Grandin (Paperback) 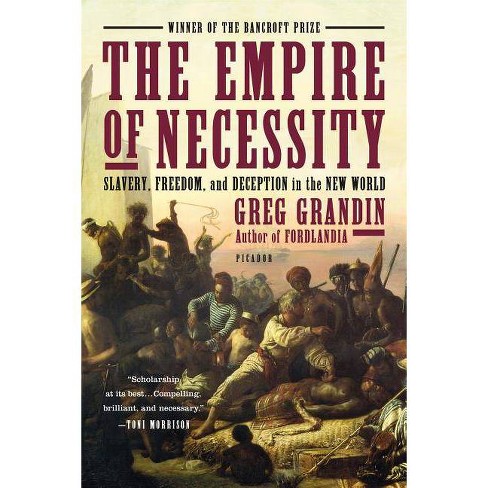 From the acclaimed author of Fordlandia, the story of a remarkable slave rebellion that illuminates America's struggle with slavery and freedom during the Age of Revolution and beyond One morning in 1805, off a remote island in the South Pacific, Captain Amasa Delano, a New England seal hunter, climbed aboard a distressed Spanish ship carrying scores of West Africans he thought were slaves. They weren't. In fact, they were performing an elaborate ruse, having risen up earlier and slaughtered most of the crew and officers. When Delano, an idealistic, anti-slavery republican, finally realized the deception-that the men and women he thought were humble slaves were actually running the ship-he rallied his crew to respond with explosive violence. Drawing on research on four continents, The Empire of Necessity is the untold history of this extraordinary event and its bloody aftermath. Delano's blindness that day has already inspired one masterpiece-Herman Melville's Benito Cereno. Now historian Greg Grandin returns to these dramatic events to paint an indelible portrait of a world in the throes of revolution, providing a new transnational history of slavery in the Americas-and capturing the clash of peoples, economies, and faiths that was the New World in the early 1800s.

"Scholarship at its best . . . Compelling, brilliant, and necessary." --Toni Morrison

"Engaging, richly informed . . . Grandin has produced a quietly powerful account that Melville himself would have admired." --The Wall Street Journal "Powerful . . . A remarkable feat of research . . . A significant contribution to the largely impossible yet imperative effort to retrieve some trace of the countless lives that slavery consumed." --Andrew Delbanco, The New York Times Book Review "Engrossing, well researched, and beautifully written . . . A rigorously sourced work of scholarship with a suspenseful narrative structure that boomerangs back and forth through time. Grandin has delivered a page-turner." --Chicago Tribune "A great and moving story." --The Washington Post "Grandin writes with the skills of a fine novelist. . . . I am thrilled and amazed by this inventive, audacious, passionate volume." --H. Bruce Franklin, Los Angeles Review of Books "Engaging, richly informed . . . Mr. Grandin ranges so freely through history that his book has a zigzagging course, like a schooner tacking constantly with the wind. But the voyage he takes us on is hardly directionless. . . . he describes his unsettling panorama in a restrained manner, avoiding exaggeration and allowing facts--many of them horrific--to tell the story." --Wall Street Journal "Elegant . . . a wonder of power, precision and sheer reading pleasure . . . Grandin takes readers on a tour of the hell of the slave trade, a tour so revelatory and compelling, we readers, unlike Captain Delano, can't fail to see the truth before our eyes." --Maureen Corrigan, NPR's Fresh Air "An exciting and illuminating narrative . . . Grandin's pen is exquisite, the descriptions are lively and sensuous. But he is also deeply reflective. The book has import that extends beyond the interest of the story." --San Francisco Chronicle "I can't say enough good things about The Empire of Necessity. It's one of the best books I've read in a decade. It should be essential reading not just for those interested in the African slave trade, but for anyone hoping to understand the commercial enterprise that built North and South America." --Victor Lavalle, Bookforum "A remarkable story, one that unravels the American encounter with slavery in ways uncommonly subtle and deeply provocative." --The American Scholar "Fascinating . . . a gripping, lavishly researched account of high seas drama . . . compulsively readable." --The Christian Science Monitor "Fascinating and engaging." --Seattle Times "In this multifaceted masterpiece, Greg Grandin excavates the relentlessly fascinating history of a slave revolt to mine the enduring dilemmas of politics and identity in a New World where the Age of Freedom was also the Age of Slavery. This is that rare book in which the drama of the action and the drama of ideas are equally measured, a work of history and of literary reflection that is as urgent as it is timely." --Philip Gourevitch, co-author of the The Ballad of Abu Ghraib "Greg Grandin has done it again. Starting with a single dramatic encounter in the South Pacific he has shown us an entire world: of multiple continents, terrible bondage and the dream of freedom. This is also a story of how one episode changed the lives of a sea captain and a great writer from the other end of the earth. An extraordinary tale, beautifully told." --Adam Hochschild, author of King Leopold's Ghost "Rooted in an event known primarily through the genius of Herman Melville's transcendent Benito Cereno, The Empire of Necessity is a stunning work of research done all over the rims of two oceans, as well as beautiful, withering storytelling. This is a harrowing story of Muslim Africans trekking across South America, and ultimately a unique window on to the nature of the slave trade, the maritime worlds of the early nineteenth century, the lives lived in-between slavery and freedom all over the Americas, and even the ocean-inspired imagination of Melville. Grandin is a master of grand history with new insights." --David W. Blight, author of Frederick Douglass: A Life "Greg Grandin is one of the best of a new generation of historians who have rediscovered the art of writing for both serious scholars and general readers. This may be his best book yet. The Empire of Necessity is a work of astonishing power, eloquence and suspense--a genuine tour de force." --Debby Applegate, Pulitzer Prize-winning author of The Most Famous Man in America: The Biography of Henry Ward Beecher

Greg Grandin is the author of The End of the Myth, which won the Pulitzer Prize, and Fordlandia, a finalist for the Pulitzer Prize, the National Book Award, and the National Book Critics Circle Award. His widely acclaimed books also include The Last Colonial Massacre, Kissinger's Shadow, and The Empire of Necessity, which won the Bancroft and Beveridge awards in American history. He is Peter V. and C. Van Woodward Professor of History at Yale University.
If the item details above aren’t accurate or complete, we want to know about it. Report incorrect product info.