The End of the Affair - (Penguin Classics) by Graham Greene (Paperback) 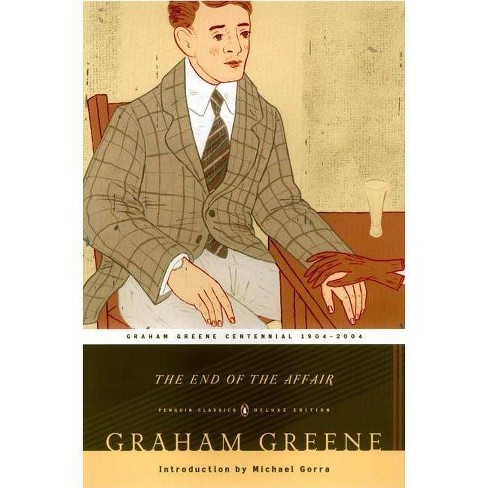 Penguin celebrates the centennial of Graham Greene's birth with commemorativeeditions of his greatest works.

A story has no beginning or end: arbitrarily one chooses a moment of experience from which to look ahead... This is a record of hate far more than of love, writes Maurice Bendrix in the opening passages of The End of the Affair, and it is a strange hate indeed that compels him to set down the retrospective account of his adulterous affair with Sarah Miles. Now, a year after Sarah's death, Bendrix seeks to exorcise the persistence of his passion by retracing its course from obsessive love to love-hate. At first, he believes he hates Sarah and her husband, Henry. Yet as he delves further into his emotional outlook, Bendrix's hatred shifts to the God he feels has broken his life, but whose existence at last comes to recognize. Originally published in 1951, The End of the Affair was acclaimed by William Faulkner as for me one of the best, most true and moving novels of my time, in anybody's language. This Penguin Deluxe Edition features an introduction by Michael Gorra. For more than seventy years, Penguin has been the leading publisher of classic literature in the English-speaking world. With more than 1,700 titles, Penguin Classics represents a global bookshelf of the best works throughout history and across genres and disciplines. Readers trust the series to provide authoritative texts enhanced by introductions and notes by distinguished scholars and contemporary authors, as well as up-to-date translations by award-winning translators.

Undeniably a major work of art...It remains from first to last an almost faultless display of craftsmanship and a wonderfully assured statement of ideas. --The New Yorker

Singularly moving and beautiful...the relationship of lover to husband with its crazy mutation of pity, hate, comradeship, jealousy, and contempt is superbly described...the heroine is consistently lovable. --Evelyn Waugh

An absorbing piece of work, passionately felt and strikingly written. --The Atlantic Monthly

Brighton Rock, The Heart of the Matter, and The End of the Affair...all have claims to greatness; they are as intense and penetrating and disturbing as an inquisitor's gaze. --John Updike

Graham Greene was in class by himself.... He will be read and remembered as the ultimate twentieth-century chronicler of consciousness and anxiety. --William Golding

Graham Greene (1904-1991), whose long life nearly spanned the length of the twentieth century, was one of its greatest novelists. Educated at Berkhamsted School and Balliol College, Oxford, he started his career as a sub-editor of The Times of London. He began to attract notice as a novelist with his fourth book, Orient Express, in 1932. In 1935, he trekked across northern Liberia, his first experience in Africa, recounted in A Journey Without Maps (1936). He converted to Catholicism in 1926, an edifying decision, and reported on religious persecution in Mexico in 1938 in The Lawless Roads, which served as a background for his famous The Power and the Glory, one of several "Catholic" novels (Brighton Rock, The Heart of the Matter, The End of the Affair). During the war he worked for the British secret service in Sierra Leone; afterward, he began wide-ranging travels as a journalist, which were reflected in novels such as The Quiet American, Our Man in Havana, The Comedians, Travels with My Aunt, The Honorary Consul, The Human Factor, Monsignor Quixote, and The Captain and the Enemy. In addition to his many novels, Graham Greene wrote several collections of short stories, four travel books, six plays, two books of autobiography--A Sort of Life and Ways of Escape--two biographies, and four books for children. He also contributed hundreds of essays and film and book reviews to The Spectator and other journals, many of which appear in the late collection Reflections. Most of his novels have been filmed, including The Third Man, which the author first wrote as a film treatment. Graham Greene was named Companion of Honour and received the Order of Merit among numerous other awards.

Michael Gorra is a professor of English at Smith College. His books include The Bells in Their Silence: Travels Through Germany and After Empire: Scott, Naipaul, Rushdie.