The Eyes of the Amaryllis - by Natalie Babbitt (Paperback) 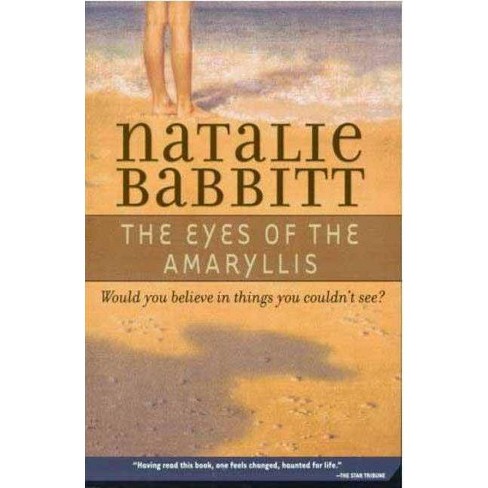 "The plot is simple but so well written and carefully constructed that its familiar elements--an estranged mother and son, an undying love--undergo a sea-change, too. And, for all its apparent simplicity, the images evoked are deep and complex." --School Library Journal, Starred Review

"Having read this book, one feels changed, haunted for life." --Minneapolis Tribune "The language is as exotic as an underwater treasure trove." --Book World "Mrs. Babbitt paints late 19th century domestic and aquatic scenes with enormous sensitivity and uses language masterfully to achieve action and imagery. The characters of the widow and her granddaughter are superbly drawn. . . . The romance and symbolism will appeal strongly to adolescent girls." --Poughkeepsie Journal "This is a skillfully told story, offering a haunting and challenging read for the middle reader." --The Baltimore Sun "Babbitt wastes nary a word, deftly carving characters and events into a gripping tale, successfully using the sea both as an impelling atmospheric force and as an effective protagonist." --Booklist "The reader is treated to a poignant awareness of the power of love and its ability to shape the lives of those who experience it most deeply." --St. Louis Post Dispatch "Natalie Babbitt's lightness of touch as she broaches deep and delicate themes is something admirable." --The Christian Science Monitor "An intricate combination of patterns, like a jacquard weave, the book succeeds as a well-wrought narrative in which a complex philosophical theme is developed through the balanced, subtle use of symbol and imagery. It is a rare story, accessible to the discriminating preadolescent; because of its perfect scale and transcendent style, it neither diminishes the subject nor the audience." --The Horn Book Magazine "An atmospheric, romantic tale." --Kirkus Reviews "'Musical' is a descriptor often applied, even over-applied, to poetry. But prose is just as obliged to rhythm and cadence, to the hum of warm vowels and the crackle of consonants. And there is music in the language of Natalie Babbitt's 16th novel, which is fitting because she is so often describing the ocean. If you listen you can hear it roaring inside her sentences. Set in an unspecified bygone era but free of fancified old-timey verbiage, this book is a little gem--something to read in one evening, tucked up in bed." --Philadelphia Inquirer "Natalie Babbitt wastes no words in the telling of this gripping tale. Love story for sure, ghost story, maybe, but a story sure to entertain and haunt ten- to twelve-year-old readers." --Armchair Interviews ". . . the perfect time to stock your shelves with these elegantly designed editions." --School Library Journal's Extra Helping on Square Fish's Babbitt reissues
If the item details above aren’t accurate or complete, we want to know about it. Report incorrect product info.