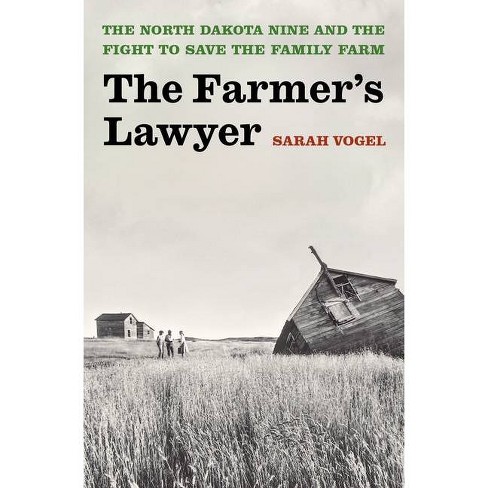 The unforgettable true story of a young lawyer's impossible legal battle to stop the federal government from foreclosing on thousands of family farmers.

An exquisitely written American saga. --Sarah Smarsh Remarkably well told and heartfelt. --John Grisham The unforgettable true story of a young lawyer's impossible legal battle to stop the federal government from foreclosing on thousands of family farmers. In the early 1980s, farmers were suffering through the worst economic crisis to hit rural America since the Great Depression. Land prices were down, operating costs and interest rates were up, and severe weather devastated crops. Instead of receiving assistance from the government as they had in the 1930s, these hardworking family farmers were threatened with foreclosure by the very agency that Franklin Delano Roosevelt created to help them. Desperate, they called Sarah Vogel in North Dakota. Sarah, a young lawyer and single mother, listened to farmers who were on the verge of losing everything and, inspired by the politicians who had helped farmers in the '30s, she naively built a solo practice of clients who couldn't afford to pay her. Sarah began drowning in debt and soon her own home was facing foreclosure. In a David and Goliath legal battle reminiscent of A Civil Action or Erin Brockovich, Sarah brought a national class action lawsuit, which pitted her against the Reagan administration's Department of Justice, in her fight for family farmers' Constitutional rights. It was her first case. A courageous American story about justice and holding the powerful to account, The Farmer's Lawyer shows how the farm economy we all depend on for our daily bread almost fell apart due to the willful neglect of those charged to protect it, and what we can learn from Sarah's battle as a similar calamity looms large on our horizon once again.

"Sarah Vogel and I share an ornery persistence in the face of bullies. This is her real life story of fighting for farmers as they were pushed off the land by a plan, ordered and carried out by top officials of our government. Sarah's story, told in her unique voice, inspires me--and I'm sure it will inspire you--to fight for family farmers." --Willie Nelson, Artist and Farm Aid President

"Vogel sets this appalling story of a politicized bureaucracy run amok against a rich portrait of North Dakota farm life and its political tradition of rural solidarity ... Her travails as a single mom, falling hopelessly behind on her own bills, add a vivid subplot. The result is an engrossing legal saga and a rousing tribute to prairie populism." --Publishers Weekly "This is my kind of story--the young, inexperienced lawyer facing big odds. It's remarkably well told and heartfelt. I really enjoyed it." --John Grisham "Engaging, suspenseful, and often heartbreaking . . . This stirring account is a testimony to [Vogel's] continuing work as a strong advocate for America's farmers." --Booklist "The Farmer's Lawyer, both an exquisitely written American saga and a trove of lived research, might serve as the definitive document of the 1980s farm crisis that in some ways never ended. Sarah Vogel's heroic battle on behalf of family farmers was historic--and has never been more relevant." --Sarah Smarsh, author of HEARTLAND "Sarah Vogel is a tireless advocate, and The Farmer's Lawyer is a powerful account about her never-ending pursuit of justice." --Dan Barber, author of THE THIRD PLATE "I'm a huge fan of Sarah and the work she's done to help family farmers." --Stephanie Land, New York Times bestselling author of MAID "In farm country, [Sarah] Vogel has earned a reputation as 'a giant killer in ag law.'" --The Nation "The most important book about the practical issues farmers face that I have ever read." --Dr. Frederick L. Kirschenmann, Distinguished Fellow for the Leopold Center for Sustainable Agriculture and President of the Board of Directors, Stone Barns "The struggle for justice for farmers is as old as the American story. No one has written a braver or better chapter than Sarah Vogel. She recounts it here, with all the historical perspective, legal genius and righteous passion that made her the great champion of the women and men who work the land." --John Nichols, author of THE FIGHT FOR THE SOUL OF THE DEMOCRATIC PARTY "A fascinating political history about farming in America, a gripping personal story about one person battling a vast, unjust system, and a clear-eyed investigation of the discriminatory systems and policies that drove so many family farmers out of business." --Megan Kimble, author of UNPROCESSED "What a wonderful book! The Farmer's Lawyer is riveting. Its characters amount to a new pantheon of heroes-author Sarah Vogel as well as the white and Native American farmers whose dogged righteousness prevails and inspires. I am humbled, heartened, and moved." --Elizabeth Fenn, Pulitzer Prize winning author of ENCOUNTERS AT THE HEART OF THE WORLD Vogel tells the remarkable story of her improbable legal victory against the federal government in her new book ... Anyone seeking a dispassionate history of the case should look elsewhere. This is an advocate's tale of fighting callous bureaucrats and cold-hearted prosecutors, while struggling to keep the lights on in her own home ... Vogel ultimately won an injunction on behalf of 240,000 FmHA borrowers nationwide ... [and] went on to serve as North Dakota's agriculture commissioner, the first woman elected to the office in any state. This book is a testament to what was an even greater achievement. -Christian Science Monitor Vogel follows this slice-of-history story with advice for the future ... the national importance of this case is such that anyone who isn't familiar deserves to know what happened, so grab THE FARMER'S LAWYER. It's worth checking out. -The Bookworm Sez Vogel is a gifted writer, weaving history, politics and vivid descriptions of the people and landscape with personal challenges like her financial turmoil as a single mother in a male-dominated field ... Great for fans of legal dramas, Sarah Vogel's The Farmer's Lawyer will leave readers inspired as she details their fight for truth, justice and family farms in the 1980s. -Shelf Awareness Vogel takes us to the kitchen table of family farmers and through their eyes shows us the impact of early 1980s predatory FmHA collection practices. We see, hear and feel the soil that has sifted through their family's hands for generations disappear ... This book is essential reading for any ag lawyer, farmer, lender or anyone who has anything to do with agriculture. -Des Moines Register

Sarah Vogel is an attorney and former politician whose career has focused on family farmers and ranchers. Vogel was the first woman in U.S. history to be elected as a state commissioner of agriculture. In 2006, the American Agricultural Law Association awarded her its Distinguished Service Award for contributions to the field of agriculture law, and Willie Nelson honored her at Farm Aid's thirtieth anniversary in 2015 for her service to farmers. An in-demand speaker and a passionate advocate for Native American rights, Vogel lives in Bismarck, North Dakota.
If the item details above aren’t accurate or complete, we want to know about it. Report incorrect product info.