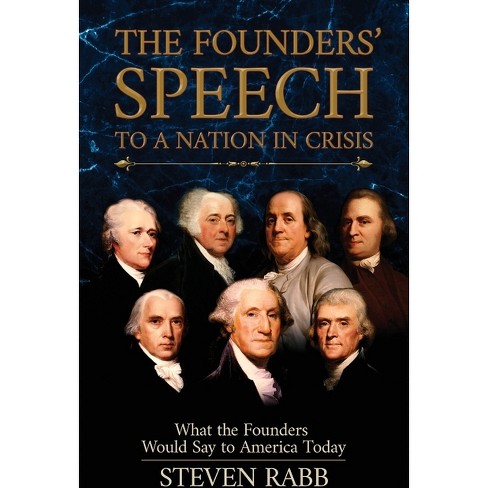 "If the Founding Fathers surveyed our nation today and together composed a single speech to America, what would they say? The prologue begins to answer that question as it chronicles a current-day reunion of America's Founding Fathers at Independence Hall in Philadelphia. Through a stroke of Providence, the Founders have assembled once again to take up their pen and save the country they love. Their resulting work, THE FOUNDERS' SPEECH TO A NATION IN CRISIS, is a tapestry in ten chapters of the Founders' words woven into a seamless and powerful speech to America. Author Steven Rabb meticulously crafts a one-of-a-kind book that will leave readers stunned at the relevance of the Founders' words to the very threats to liberty that Americans face today. Taken directly from the Founders' letters and documents, this book is nothing less than a stand-and-cheer celebration of America's founding ethos and principles, a much need primer on the Constitution, a caution on human nature and government, voice for economic freedom, a clarion call to defend religious liberty, and a rallying cry for every patriot to reclaim their country, once again, from the outstretched arms of tyranny!"--Back cover

Readers who want to better understand the founding principles of America, as expressed in the words of the Founding Fathers, will love this book. In developing "The Founders' Speech to a Nation in Crisis," author Steven Rabb spent two years compiling the words of the Founding Fathers into narrative form, weaving their texts into a single powerful speech to America. His purpose was to give depth to the conversation happening in America today about America's founding ideals. In so doing, Steven has also created a single source of "Best of" quotes from the Founding Fathers that will be read and re-read for generations to come.In a work described as "The best single source for the understanding of America's Founding," and reviews such as, "This book nearly made me stand and cheer!" author Steven Rabb has created a powerful read through the synergized writings of America's Founding Fathers. Through their words, Steven has demonstrated with amazing clarity the continuing relevance of America's founding ideals, and their resonance for our nation today. Framing the work as a reunion between the Founders in contemporary America, Steven gives voice to their views on modern-day issues from religious liberty and the rule of law to freedom of speech and the continuing threat of tyranny. "The Founders' Speech to a Nation in Crisis" is a tapestry of the Founders' own words written in ten chapters and woven into a single, powerful speech and call to action for every American. The first few chapters remind readers of the God-given rights of man, along with the virtues and duties required in a people who seek to retain them. Through the writings of George Washington, John Adams, Alexander Hamilton, James Madison, Thomas Jefferson, and many of their contemporaries, the speech builds as the Founders caution against the threats to liberty from unbounded power and unrestrained majorities. The continuing relevance of our Founders' words - as revealed in this unique, meticulously crafted work - is a clarion call to defend our natural rights that will stun readers and leave them celebrating America's founding and founding fathers. As one reviewer stated: "I am a humble guy. A high school educator. A craftsman. A successful small business operator. Certainly not a scholar. Your book made my heart leap with excitement. We as a nation have fallen so far, but this gives me hope we can turn this immense vessel around. So glad this came across my radar. So many of my friends and fellow believers are going to have their own copy arriving very soon! After-dinner discussions this Thanksgiving? Yes sir, your book."

"My heart has been aching, wondering what our Founding Father's would think of our country today...then I found this book. I was in tears just in the Prologue! How did we let things get so far from the original intent? How do we get it back? Every American should have and read this book! My dream is to get the Founder's Bible in every American's home and know I want to add this book to it as well!"

"It is nearly impossible to put this book down. The author has managed to consolidate the ethos of our democratic Republic by consolidating the thoughts or words of our founders and other important thinkers from following generations. The index is a who's who of the most important people of our Republic. Every elected official at every level of government should read this book. Thank you Steven Rabb!"

"This is a fantastic read. It can be read in one day and reread the next. Steven Rabb does an excellent job of gathering opinions of all of The Founding Fathers and applying them to today's world. Should be read by all those currently serving in government FIVE STARS!"

"I read the Kindle version in one reading...I couldn't put it down! Ordered the paperback and will order a case of these for local politicians! This book is an excellent timely reminder of what makes America great and how we can keep it that way! Thank you!"