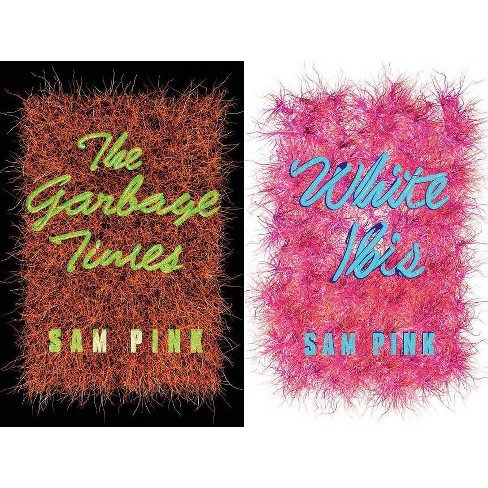 Praise for The Garbage Times/White Ibis
Chicago Review of Books, One of the Best New Books of May 2018
LitHub, One of the "Best Reviewed Books of the Week
One of Dennis Cooper's Favorite Books of the Year

"The novellas are hilarious and unabashedly honest in showing how bizarre life is, how unpredictable people are, and yet how each person craves love, dignity, freedom--the fundamental needs we all share. . . . There is a mysterious momentum at work in the voice-driven narrative, a Murakami-like invisible hand that guides these characters with a purpose to press on. . . . His stories are unique and true and impossible to put down--what more could anyone want?" --Taylor Larsen, Los Angeles Review of Books

"The Garbage Times are followed, almost giddily, by the up-and-away of White Ibis. And in this book, Pink has done something so new, so different, that I'm struck by what a stroke of genius it was to put the Chicago book right up against it for contrast . . . The Florida book is so expansive, so wild and lovely, so full of normal-ish people and exotic animals and the oddest thing of all in a Sam Pink book--a fleeting inner calm that almost borders on happiness . . . White Ibis is so powerful and so full of hope." --Chicago Review of Books

"Between awful jobs, country club soirï¿½es, reptile shows, and an unlikely turn entertaining a troop of Girl Scouts, the narrator and his girlfriend learn to thrive in 'the theme park state.' Pink certainly gets Florida right, and his prose is wonderfully offbeat." --Publishers Weekly

"The Garbage Times and White Ibis, a new pair of related novellas by Sam Pink, crackle with humanistic intimacy. . . . Pink's best writing . . . wins him fierce and cultish admiration. Part of this, I think, he owes to his chosen subject. For all the attention political theorists and commentators have lately devoted to a definition of the working class, not much fiction chronicles the sheer weirdness of working-class life and labor today. . . . He's also a keen observer of his kind, and the book brims over with the blasted personalities of Chicago's low-wage labor force. . . . The details are funny, but they never come at the characters' expense (as they do, for example, when Bukowski writes about 'subnormals'). Instead, Pink accords them a heightened humanity." --The New Republic

"Pink keeps putting out books and I keep putting everything aside to devour them. Why? Because reading Sam Pink is entering a world where humor and absurdity constantly collide with depression and the underlying violence/violent urges hidden in everyday life. Pink can make you laugh, cringe, and delve into a philosophical rabbit hole, sometimes all within the same paragraph." --Gabino Iglesias, LitReactor

"The Garbage Times/White Ibis is not only Pink's latest; it might just be Pink's best so far. . . . There are no easy descriptions when it comes to talking about Pink's work. Unique comes to mind, but it fails to convey the ease with which he tackles deep themes like depression and self-loathing. Humorous also applies, but it doesn't do justice to the way the author manages to bring readers into his life effortlessly and then shares with them devastating truths, both personal and universal. Likewise, words like entertaining, honest, wild, and self-aware all do the trick, but fall short because, even if used together, leave out some crucial element of Pink's prose. The solution to this conundrum is easy: pull out a tired phrase and, as convincingly as possible, say to readers everywhere 'This is special, and the only way to truly get a sense for what's going in in this book is to read it.' The Garbage Times/White Ibis is classic Pink in the sense that space, sentence structure, and even the humor are all there, but it also feels like a new step for the author. . . . If you have ever wondered how deep simplistic writing can be, then this is a book you should not miss. If you have ever asked yourself if an unabashedly honest view of life wrapped in a thin veil of hilarity could work, then the answer is to go read this right now. More than author, Pink is a one-person movement with a distinctive style, and this book adds yet another outstanding entry to a catalog that is already a must for anyone trying to get a real sense of what contemporary literature is all about." --Vol. 1 Brooklyn

"Pink is able to convey much with the simplest phrase. The trick is, you are invited into his world. And you are not told what to think...I love The Garbage Times because it represents a culmination of Pink's writing to this point." --Joyless House

"White Ibis is something of a departure from Pink's oeuvre . . . as another unnamed narrator escapes from Chicago with his girlfriend to relocate to Tampa. The change of scenery, especially when put in contrast with the Chicago of The Garbage Times, feels like stepping into another dimension. Throughout both volumes, Pink's prose continues to balance between goofy nihilism and absolute sincerity. He has always been a writer deeply concerned with the forgotten and abandoned pockets of humanity and that remains true in each of these books. As the narrator of White Ibis observes, 'Not everyone has a sash full of skills and a heart full of love.'" --The Public, "Peach Picks"

"These juxtaposed novellas are about how any benumbed existence, any circumstantial grind, can backfire and produce a mind, despite the will of our petty culture, despite the domestication every act of love unwittingly employs." --Full Stop

"The energy, pace and stream-of-consciousness writing in The Garbage Times/White Ibis pulls the reader along almost unconsciously. You'll find yourself digging in, hanging on to every frenetic word and turn of phrase, laughing out loud and flipping through page after page." --Popscure

"By the end of Pink's latest two-volume release, The Garbage Times/White Ibis . . . the narrator finally manages to uproot himself from Chicago, a surprising shift that results in the author's most complete, engaging, and funniest work yet." --PANK

"From early on, Pink highlights the fact that the life of an artist isn't glamourous. In the first novella, The Garbage Times, there is no lovely home, no bookshelves adorned with the all-time greats. It's Chicago in the winter. A place where everything is cold, everyone suffers, and being an artist doesn't mean you don't have to clean up puke. . . . This stage of Pink's life lacks any kind of grace, but still he weens joy from the trashy world. It's the trivial things--his daily routine getting drinks from the convenience store, his cat, the stories told by his coworkers--that all form this beautiful tapestry of sorrow. . . . The Garbage Times/White Ibis is a chaotic, dark, and hard to put down object." --Heavy Feather Review

"I love the pulse of Sam Pink's sentences, the way they can hold the gorgeous and the grisly and the hilarious all at the same time. The Garbage Times/White Ibis thrilled me and messed me up, left me feeling a little dazed and a lot changed." --Laura van den Berg, author of The Third Hotel and Find Me

"Sam Pink is the most important writer in America. This isn't hyperbole. In a world of literary Bing Crosbys, Sam Pink is our Little Richard. The Garbage Times/White Ibis is the voice of the new writing underground." --Scott McClanahan, author of The Sarah Book and Hill William

"Sam Pink's writing is exquisitely succulent--it stimulates my intellect, makes me laugh and smile and feel complex emotions, and delights me with its tenderness, novelty, intensity, concision, and surprises." --Tao Lin, author of Trip and Taipei

"Sam's writing reminds me of Kurt Cobain's or Eminem's, with a mixture of anger and dead babies and umbilical cords. It alternates swiftly from humor and playfulness to isolation and sadness. You might read a piece through the first time laughing your ass off, but if you stay on the page long enough, let the words really sink in, you soon realize, hey, this isn't funny at all, actually, this is really ******ed up and sick and heartbreaking as hell." --Elizabeth Ellen, editor of Short Flight/Long Drive Books

"By eschewing a traditional plot and letting the voices of the characters tell their own tales, the author created an immersive novel built on oral tradition and street slang. When mixed with a touch of social critique and a good dose of humor, Witch Piss becomes one of Pink's most bizarre and daring offerings so far." --Bookslut

"Witch Piss seemed to--please forgive the triteness of what I'm about to type--'give a real voice to the otherwise voiceless.' Laughed out loud a lot while reading this book." --Jordan Castro, "My Favorite Art (and Other) Things of 2014," Hobart

"How can you tell a story that is about nothing? Sam Pink's Person, the Bizarro equivalent of Albert Camus's The Stranger (as if The Stranger wasn't already strange enough), does just that. Person is written in the first person, and it's about a person, living in Chicago. That's it--or at least, that's about as much as we can say about it. Take this sentence though: 'I live in Chicago and I don't get along with a lot of people and the reasons are always new and wonderful.' It's poetry that reads like a book--or maybe vice versa. This is existentialist Bizarro Literature at its finest." --Flavorwire

"A phenomenal achievement." --Mike Daily, author of Alarm and Valley

"If you read just one book this year, let it be Sam Pink's Person." --Electric Literature

"One of the most exciting, most inspiring novelists currently writing." --Thought Catalog

"It made me laugh and my hair stand on end." --HTMLGIANT

"...there's a troubling build-up of rage and self-destructive desire that makes Person incredibly unsettling. In other words, he's a great example of why I carry Mace. --The Fanzine

"It's a compulsive page-turner [...] There's something infectious, I think, about the honesty of the book, in how it relates the sometimes unflattering aspects of what goes on in a person's daily life." --The Faster Times