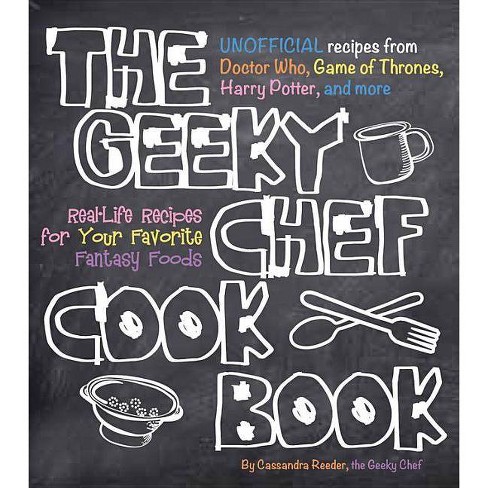 Let your inner geek loose in the kitchen with this book of unofficial recipes from your favorite fantasy & sci-fi movies and shows like Harry Potter, Dr. Who & more!

You've watched the TV shows and movies, played the video games, and read the books. Now it's time to level-up your geek factor...into the kitchen.

From Game of Thrones, Doctor Who, The Hunger Games, and Star Trek to Super-Mario Bros., The Legend of Zelda, and World of Warcraft, The Geeky Chef Cookbook is the nerd's favorite strategy guide for tackling dinner. A self-proclaimed nerd with a fondness for cooking, author Cassandra Reeder, creator of The Geeky Chef blog, has thoroughly researched every dish to make the final product look and taste as close to the source material as possible. With easy-to-follow step-by-step instructions and fun themed photos, these simple recipes will soon have you unlocking achievements in the kitchen, no matter if you're cooking for yourself, a friend, or even a viewing party. Includes over 60 delectable, ethereal, and just plain odd--yet truly delicious-- recipes that you can re-create right in your own home. If you'd like to make a dish that looks as great IRL as it does in game, this is the book for you. A perfect holiday gift for gamers, dorks, and budding chefs, The Geeky Chef Cookbook blends technique, style, flare and charm into a tasty treat. With vibrant colors, these dishes will level you up to the hostess-with-the-mostest for game nights or dinner parties. Let your love for sci-fi or fantasy shine with The Geeky Chef series by creating food and drinks from your favorite shows, movies, and video games. Your cool, homemade, fiction-themed spread will make you the life of the party. Incredibly fun and creative, and colorfully designed, The Geeky Chef books make the perfect gift for the geek in your life who lives in a world of their own.
Other titles in this series include: Geeky Bartender Drinks, Geeky Chef Cookbook, Geeky Chef Drinks, and Geeky Chef Strikes Back.
So if you've ever found yourself thirsting for Lon Lon Milk, drooling over Pumpkin Pasties, or being a tad bit curious about Cram, this cookbook is for you. Fantasy foods are fantasy no longer! Raise your cooking game to boss-level proportions with The Geeky Chef Cookbook.

Drawing inspiration from movies, video games and television shows, more than 60 recipes full of fantasy and science fiction are featured throughout the new cookbook. Lemon cakes - and bowls of brown if you're, um, into that - allow you to eat your feelings after that Game of Thrones season five finale, while other fictional food formulas, including 1UP mushroom cupcakes (Super Mario Cart), Romulan Ale (Star Trek), bacon pancakes (Adventure Time) Moloko Plus (A Clockwork Orange) and lembas (The Lord of the Rings), transport your taste buds into another world. - Creative Loafing

Cassandra Reeder is an avid home cook and lifetime geek. For almost a decade, she has been helping other geeks and nerds all over the world make their fictional food fantasies come true at www.geekychef.com. In 2014, she released The Geeky Chef Cookbook, which to her immense delight and gratitude, has been very well received. In 2017, she followed the success of that book with a sequel, The Geeky Chef Strikes Back, a collection of even more unofficial recipes from geek life, and in 2018, her collection of geeky cocktails and mocktails, The Geeky Chef Drinks, was published. Cassandra currently lives in Portland, Oregon.