The Gingerbread Man - Abridged by Jim Aylesworth (Board Book) 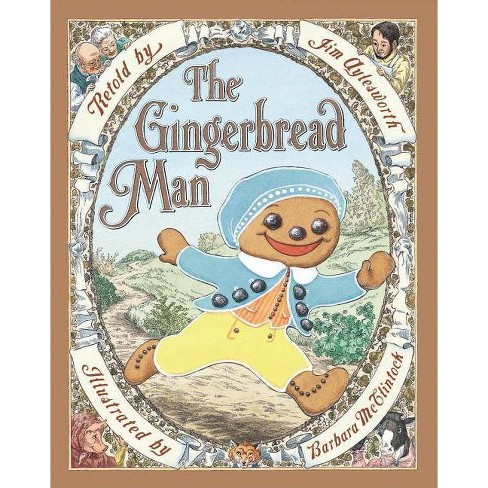 This irresistible classic tale retold by Aylesworth and illustrated by McClintock is now available for the first time as a board book. Includes a bonus recipe for delicious gingerbread man cookies on the back cover. Full color.

This NEW YORK TIMES BOOK REVIEW Best Illustrated Book is now in Board Book format just in time for the holidays!This irresistible retelling of the Gingerbread Man by Jim Aylesworth and illustrated by Barbara McClintock is now in board book format for the first time, and it's a perfect treat for cookie lovers everywhere. Children enjoy chiming in with Aylesworth's charming, rollicking refrains, accompanied by whimsical animal images and a delicious recipe for gingerbread men. (Note: the text has been adapted to fit board book format)

Praise for The Gingerbread Man

Be prepared for listeners to burst out in a chorus of giggles and join right in. -- Bulletin of the Center for Children's Books, starred review

The familiar tale finds a fresh makeover in the hands of Aylesworth and McClintock. -- Publishers Weekly, starred review

Barbara McClintock has written and/or illustrated over 40 distinguished books for children. Emma and Julia Love Ballet which she wrote and illustrated, received three starred reviews, and My Grandfather's Coat, retold by Jim Aylesworth, also received three starred reviews and was named a Sydney Taylor Honor Book. Her books have five times been named New York Times Best Illustrated Children's Books. She has received a Boston Globe-Horn Book Honor, as well as a myriad of other awards and honors. Barbara lives in Connecticut with her family and their four very graceful cats.
Jim Aylesworth tells his stories with generous doses of out loud sounds, rhythms, and rhymes. His twenty-five-year teaching career taught him exactly what children love best in a story. He lives in Chicago, Illinois, with his wife.
If the item details above aren’t accurate or complete, we want to know about it. Report incorrect product info.