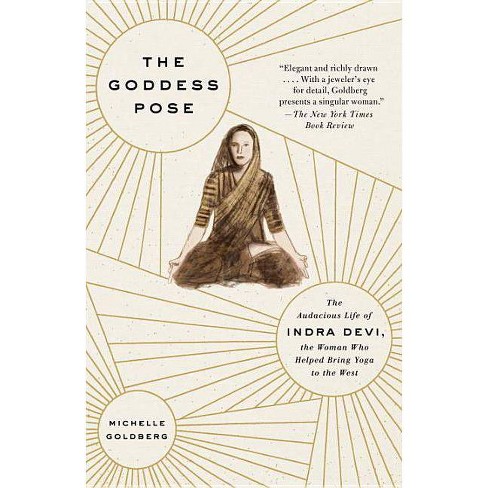 "Groundbreaking. . . . [Goldberg's] clear prose illuminates the forces of war and social change and reveals the complex roots of our country's yoga boom." --San Francisco Chronicle "Fascinating. . . . [Devi's] story and influence live on in this can't-miss memoir." --Yoga Journal "It's hard to believe that the life of Indra Devi . . . hasn't been made into a blockbuster film. . . . Without idolizing or condemning her, Goldberg evokes Devi's complicated nature as deftly as she does the Russian Empire, Weimar Berlin, occupied Shanghai, and so many of the other places where Devi worked, loved, and proselytized." --New York Magazine "Goldberg's book is lots of fun. . . . Even if you don't care enough about yoga to hold a pigeon pose for the length of time it takes to say [the] title, Indra Devi . . . remains no less a fascinating character." --Los Angeles Times

"Engaging. . . offers fresh insights into commonly held assumptions, including the relatively new origins of many physical asanas. . . . Goldberg's own discovery of yoga and Indra Devi forms a riveting prologue to an expansive book that underlines how truly global yoga has become after it was taken from Indian shores more than a century ago." --The Times of India "A celebration of female freedom and everything it can bring: an appetite for adventure, fearlessness in the face of challenge, and, most important, discovery and assertion of self."
--Anna Holmes, founding editor, Jezebel "The story of how Devi came to embrace yoga and spread its gospel in America is as fascinating as it is unlikely. . . . [Goldberg's] goal in writing The Goddess Pose seems to have been not just chronicling the life of one of the world's great iconoclasts, but also providing a history for how hatha yoga went from an Indian spiritual tradition to an everyday part of western lives. She succeeds admirably on both counts." --The Guardian "Michelle Goldberg's masterful engagement with her astonishing subject--and with the diverse political, spiritual, and physical worlds she inhabited--is evident on every page." --Rebecca Traister, author of Big Girls Don't Cry "Goldberg's account of Devi takes the reader through three chronicled, influential centuries of the yogi, actress, and fearless voyager's life which will leave you with a better understanding of how westernized Yoga differs from its roots . . . and a major dose of inspiration to get you on the way to your next blissed-out savasana." --Nylon "[The Goddess Pose] captures Devi's Forrest Gump-like propensity to live parallel to some of the most important moments of the previous century." --New York Post "[Goldberg] expertly assembles the puzzle pieces of Devi's life, pausing to provide context for the growing influence of spiritualism on modern American life." --The Globe and Mail (Toronto) "Whether you're a student of yoga, a history buff, an armchair adventurer, or just a reader in search of an unputdownable story that happens to be true, you'll love this fascinating biography of one of the twentieth century's boldest, most influential women." --Katha Pollitt, author of Learning to Drive: And Other Life Stories "Goldberg brings Indra Devi, a complicated and incredible woman, to life in Technicolor brilliance. . . . I'll never think of yoga the same way again--and neither will you." --Susannah Cahalan, New York Times best-selling author of Brain on Fire "Terrific. . . . An irresistible story of yoga's unlikely and, yes, even audacious origins." --BookPage
If the item details above aren’t accurate or complete, we want to know about it. Report incorrect product info.