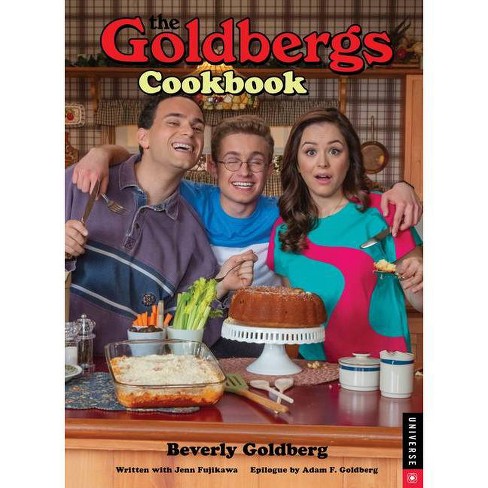 This official cookbook features totally eighties dishes from the hit TV show. Fans have been clamoring for the recipes created by television's favorite sMother, Beverly Goldberg, and The Goldbergs Cookbook delivers. Played by Wendi McLendon-Covey and based on creator and show-runner Adam F. Goldberg's real mother, Beverly Goldberg takes every opportunity to cook for her family, putting forth her philosophy: food is love-- and a way to manipulate. These seventy recipes, most taken from the same recipe box prominently featured in the show's sixth season, give hungry fans their best chance to cook like Beverly, who uses outlandish quantities of cheeses and meats (with veggies few and far between)--and who doles out unwanted help and snuggies to her ungrateful kids as she goes. Recipes include Beverly's infamous Shrimp Parm-- and many other Parms, since Parming is her thing; meaty family favorites such as Rib Pot Pie (No Peas, No Carrots), 7-Meat Meatloaf, and Big Tasty Pork; and recipes Bev makes with good (unsolicited) intentions, including Barry's Special Power Chili and Bran Muffins to Help You Make, among many others. Retro food photographs accompany many of the recipes and show stills will showcase the entire Goldberg family in all of their high-strung glory.

It's time to dig in like it's 1980-something!'The Goldbergs Cookbook' is now available to order and fans of the ABC sitcom are in for a treat. A lot of treats. --ABC.COM

Beverly Goldberg is the real-life mom of The Goldbergs creator and showrunner Adam F. Goldberg. She has been compiling her recipe collection for decades. Jenn Fujikawa, coauthor and food photographer, is a lifestyle and pop-culture writer. Her blog, JustJenn, features her recipes and food photography.
If the item details above aren’t accurate or complete, we want to know about it. Report incorrect product info.