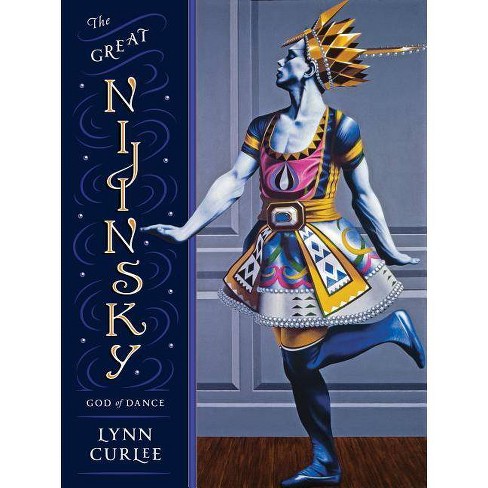 $17.99
MSRP$19.99
no reviews yet
be the first!be the first! ratings
Shipping
Free standard shipping with RedCard
Loading, please wait...
Help us improve this page

The story of Vaslav Nijinsky's life--onstage and off, in all its glamour and tragedy--unfolds. Originally drawn to Nijinsky by photos of the ballet dancer in costume, Curlee (Trains, 2009, etc.) engaged in extensive research and details major events in Nijinsky's life, beginning with his birth to traveling Polish performers and continuing through to his eventual confinement in various asylums and death in 1950. While much of the content focuses on Nijinsky's art, both his dancing and choreography, time is also spent on his personal life. The text includes short biographical sketches of important artists, such as Diaghilev and Stravinsky, with whom Nijinsky crossed paths as well as explorations of Nijinsky's romantic relationships and mental health. These discussions are frank, and though they never devolve into titillation, they do occasionally include questionable descriptions ("He was...what some would term stark raving mad") and label Nijinsky's sexual orientation using modern terms. Interspersed between chapters are stylized programs detailing various ballets that Nijinsky performed or choreographed, including descriptions of the ballet's history and plot and paintings by the author. Quotations from contemporaries and occasionally the dancer himself breathe further life into the narrative. The photographs and illustrations add interest and points of engagement in what is an otherwise tragic tale of a brooding artist. A glossy introduction to the highs and lows of Nijinsky's life and work. --Kirkus Reviews


Born to Polish parents who worked as traveling performers, Vaslav Nijinsky was raised to be onstage. After training at the Imperial Ballet School in Russia, Nijinsky began performing and his undeniable skills amazed audiences. He also began choreographing, bringing new and sensational pieces such as The Rite of Spring to the stage. In this biography, Nijinsky's accomplishments on the stage are detailed, accompanied by paintings by the author and archival photographs. "Programs" for Nijinsky's performances, including facts and summaries of the ballets, separate the chapters. The biography focuses on more than just Nijinksy's art, delving into his personal life, including his relationships, sexuality, and his mental health. Curlee provides context for Nijinsky's life and introduces readers to the art scene of the time, including brief biographical sketches of other figures such as Fokine and Stravinsky. Appropriate for preliminary research, and simply for those interested in learning more about Nijinsky, the included back matter provides readers looking to delve deeper with avenues to continue exploring. VERDICT While contemporary conceptions of sexual identity and mental illness cannot easily be superimposed over historical biographies, readers nevertheless are presented with a full picture of Nijinsky's life.
--School Library Journal Riveting, richly saturated acrylic-on-canvas paintings highlight the latest from Curlee (Mythological Creatures: A Classical Bestiary), about the celebrated early-20th-century dancer Vaslav Nijinsky and his times. More than just a biography, this homage to the "god of dance" often strays from Nijinsky's life story to introduce other great artists of the era--composer Igor Stravinsky, dancer/choreographer Mikhaile Fokine, designer Lï¿½on Bakst, and, especially, impresario Sergei Diaghilev--whose combined talents made the Ballets Russes company, where Nijinsky made his name, a sensation. Curlee follows the dancer's life from his birth in Kiev to itinerant Polish entertainer parents, through his early years at the Russian Imperial Ballet School, to his discovery by Diaghilev and spectacular 1909 Parisian debut, tracing his remarkable, brief career as well as his descent into mental illness. In frank accounts, Curlee discusses Nijinsky's bisexuality, including his open affair with Diaghilev, seen as scandalous at the time, and his impetuous marriage to a Hungarian socialite. The book's spacious pages--heavily illustrated with original paintings, vintage photos, and simulated programs--elevate the moving story, making for a memorable volume that captures the dancer's singular talent, fame, and notoriety. Ages 12-up.--Publishers Weekly
Vaslav Nijinsky (1890-1950) was the brightest star of the Ballets Russes, a virtuoso dancer and choreographer the likes of whom no one had ever before seen. This heartfelt biography traces Nijinsky's trajectory from a lonesome childhood through his 1909 Paris debut, ensuing mega-stardom, and notoriety as a boundary-breaking choreographer to his diagnosis of schizophrenia and, at age thirty, his institutionalization. In his five short years with the Ballet Russes, "Vatsa" originated several of ballet's most iconic roles and created the landmark modernist works The Afternoon of a Faun and The Rite of Spring (the latter considered so scandalous its premiere incited a riot). Curlee sensitively explores Nijinsky's contradictions as a magnetic, expressive dancer with little social grace; a provocative performer and sex symbol tormented by his own sexual desires and behaviors; a bisexual man who has retroactively become a celebrated "gay icon" but who passively "followed in [the] wake" of his out-and-proud partner, impresario Sergei Diaghilev; and a visionary artist intent on documenting his descent into mental illness. Beautifully designed, the book is punctuated with theater program-like spreads with brief descriptions of ballets accompanied by Curlee's striking jewel-toned portraits and archival photographs.
--Horn Book Magazine

Attendees of the May 18, 1909, performance of Sergei Diaghilev's
Ballets Russes were in for a surprise. Accustomed to a more staid, conservative ballet, they were shocked to their feet by the electrifying leaps and jumps of Vaslav Nijinsky, making his solo debut. Flamboyant, creative, and single-mindedly dedicated to dance, Nijinsky established himself as one of the greatest dancers in history, paving the way for dancers such as Rudolf Nureyev and Mikhail Baryshnikov. Curlee's biography incorporates his own lush paintings into a luxurious volume with creamy thick paper and crisp, clear type. Interspersed through the text are program-style pages, which describe the ballets performed and include quotes and commentary on the performances. Photographs of Nijinsky and the people in his life punctuate and amplify the text. Curlee's narrative is lucid and smooth, and source notes, a bibliography, and an index round out the book. This elegant volume has a place in any collection.
--Booklist
If the item details above aren’t accurate or complete, we want to know about it. Report incorrect product info.