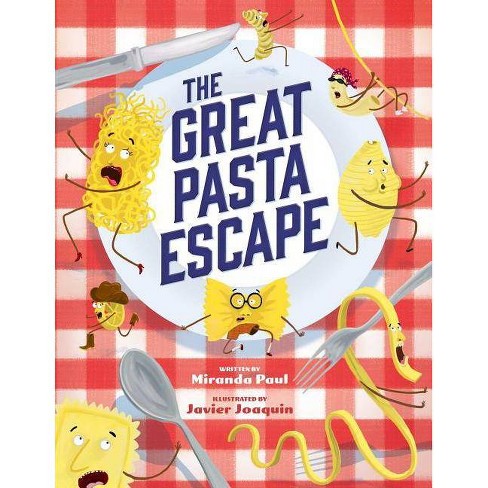 Various types of pasta have followed the rules since they were made but when the learn they're meant to be eaten, they plot how to escape the factory.

Join a ragtag group of pasta as they complete the greatest escape of their lives in this hilarious new book by Miranda Paul! Since the beginning of their lives (which was earlier that morning), the pasta at the factory followed the rules. They stuck to their own kind. They stayed still in their packaging. And they never spoke to humans. That is, until they discover what it really means to be pasta: They will eventually be eaten by humans! Fettuccine is scared, Ramen is outraged, and Mac is just trying to keep the peace among all the pasta. Will they be able to work together to use their noodles and concoct a great escape?

Miranda Paul is an award-winning children's author who writes serious nonfiction books and silly made-up stories like Trainbots, Blobfish Throws a Party, and this one. She loves using her noodle to play trivia and board games. Her favorite vacation spot is the island of St. Lucia, and her favorite pasta is penne. (Which is why she purposely kept penne out of this book and asks you never to read it aloud when they are around.) Visit her super website at mirandapaul.com. Javier Joaquin was born in Buenos Aires, Argentina. He discovered his love for illustration in early childhood. His inspiration comes from his acute observation of urban characters, architecture, and nature.
If the item details above aren’t accurate or complete, we want to know about it. Report incorrect product info.