The Greatest Baseball Stories Ever Told - by Jeff Silverman (Paperback) 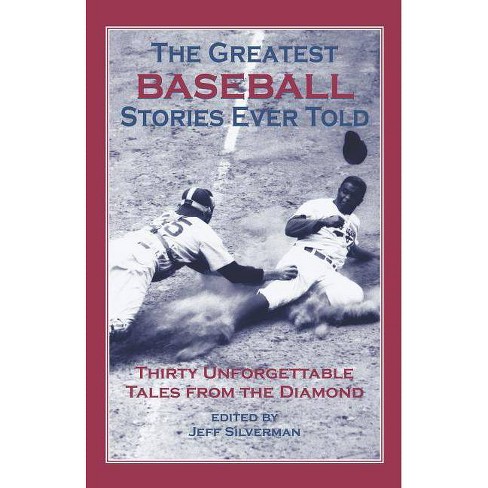 At a 1931 barnstorming exhibition game in Tennessee, a seventeen-year-old pitcher for the Chattanooga Lookouts struck out Babe Ruth and Lou Gehrig back to back. Her name was Jackie Mitchell--organized baseball's first girl pitcher. On September 9, 1965, Sandy Koufax made baseball history by pitching his fourth perfect game. In July 1970, a stripper rushed onto the field at Riverfront Stadium to kiss Johnny Bench, temporarily disrupting a game attended by President Nixon and his family. These are just some of the great, quirky, and comic moments in the annals of baseball recorded in THE GREATEST BASEBALL STORIES EVER TOLD. Here also are profiles of such legendary figures as Joe DiMaggio, Pete Rose, and Yogi Berra, essays that explore the complexities and pleasures of the game, even an excerpt from the movie Bull Durham. This is the perfect book for anyone who has ever played so much as a game of catch. Contributors include: John Updike Doris Kearns Goodwin Abbott & Costello Ring Lardner Bill Barich Zane Grey David James Duncan Al Stump Pete Hamill P.G. Wodehouse Damon Runyan Roy Blount, Jr. Richard Ben Cramer Gay Talese A. Bartlett Giamatti and many more

From the olden days of flannel uniforms and metal spikes to those of retractable-domed stadiums and nine-figure player salaries; from the golden era of Babe Ruth and Ty Cobb to that of present-day sluggers like Barry Bonds and Ken Griffey, Jr., perhaps no single athletic pursuit has managed to capture the imagination and devotion of the sporting public as much as the game of baseball. And it is no wonder that some of our finest writers have weighed in on this rich and fascinating subject.In The Greatest Baseball Stories Ever Told, editor Jeff Silverman collects some of the best writings, both fact and realistic fiction, that reflect the resonant history, tradition, agony and ecstasy of what has been affectionately dubbed our national pastime.With contributions from: John Updike, Gay Talese, Pete Hamill, Gary Smith, Roy Blount, Jr., Red Barber, Zane Grey, Vin Scully, Doris Kearns Goodwin, and many more.

Every once in a while, a book publisher comes up with a great concept for a series of books that deserve more than superficial recognition. Such a series is The Greatest (fill in the blank) Stories Ever Told, anthologies that should win places on many bedside tables. On the long winter nights that lie ahead, such stories make great reading. --The Lexington County Chronicle