The Hazards of Good Breeding - by Jessica Shattuck (Paperback) 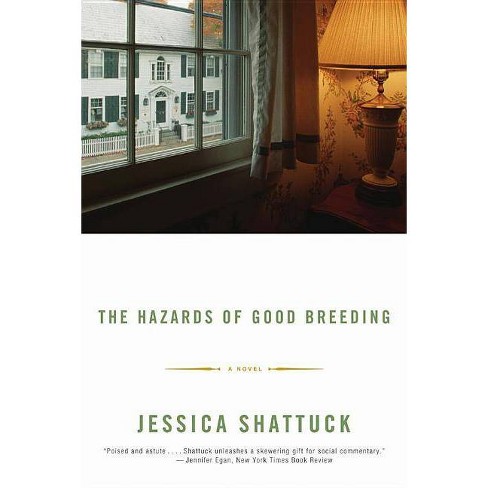 $13.99
no reviews yet
be the first!be the first! ratings
Buy 2 get 1 free on video games, movies and books
Online only •
Shipping
Free standard shipping with RedCard
Loading, please wait...
Help us improve this page

This "richly appointed and generously portrayed" (Kirkus Reviews) debut novel tells the story of a WASPy, old-Boston family coming face to face with an America much larger than the one it was born in. Told from five perspectives, the novel spans an explosive week in the life of the Dunlaps, culminating in a series of events that will change their way of life forever.

Caroline Dunlap has written off the insular world of the Boston deb parties, golf club luaus, and WASP weddings that she grew up with. But when she reluctantly returns home after her college graduation, she finds that not everything is quite as predictable, or protected, as she had imagined. Her father, the eccentric, puritanical Jack Dunlap, is carrying on stoically after the breakup of his marriage, but he can't stop thinking of Rosita, the family housekeeper he fired almost six months ago. Caroline's little brother, Eliot, is working on a giant papier-mâché diorama of their town--or is he hatching a plan of larger proportions?

As the real reason for Rosita's departure is revealed, the novel culminates in a series of events that assault the fragile, sheltered, and arguably obsolete world of the Dunlaps.

Opening a window into a family's repressed desires and fears, The Hazards of Good Breeding is a startlingly perceptive comedy of manners that heralds a new writer of dazzling talent.

A New York Times Notable Selection and a Boston Globe Book of the Year.