The Heart: Frida Kahlo in Paris - by Marc Petitjean (Hardcover) 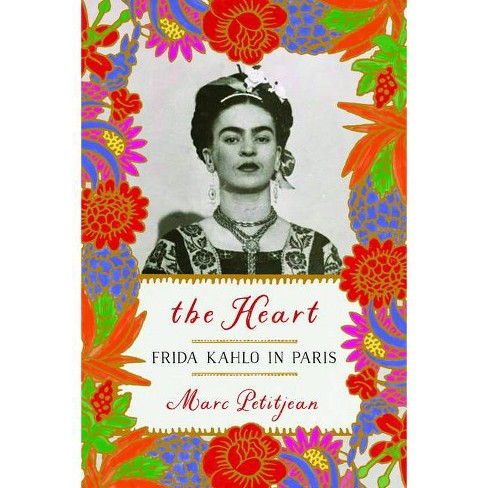 This intimate account offers a new, unexpected understanding of the artist's work and of the vibrant 1930s surrealist scene. In 1938, just as she was leaving Mexico for her first solo exhibition in New York, Frida Kahlo was devastated to learn from her husband, Diego Rivera, that he intended to divorce her. This latest blow followed a long series of betrayals, most painful of all his affair with her beloved younger sister, Cristina, in 1934. In early 1939, anxious and adrift, Kahlo traveled from the United States to France--her only trip to Europe, and the beginning of a unique period of her life when she was enjoying success on her own. Now, for the first time, this previously overlooked part of her story is brought to light in exquisite detail. Marc Petitjean takes the reader to Paris, where Kahlo spends her days alongside luminaries such as Pablo Picasso, André Breton, Dora Maar, and Marcel Duchamp. Using Kahlo's whirlwind romance with the author's father, Michel Petitjean, as a jumping-off point, The Heart: Frida Kahlo in Paris provides a striking portrait of the artist and an inside look at the history of one of her most powerful, enigmatic paintings.

"Compelling...[Petitjean] captures the pop and fizz of artistic circles in Paris during the interwar years...The Heart is a distinctively intimate undertaking, which is no small feat considering its well-known cast of characters...an unconventional and deeply personal biography." --Washington Post "An intimate portrait of the artist and her time in the lively 1930s surrealist scene." --New York Times Book Review "This crisp, concise, radiant gem of a book is a delight all the way through, whether you see it as a yarn of multigenerational heartbreak and longing, a beautiful and unlikely father-son chronicle, a classic artist-muse love story, or a cautionary tale about the most obsessively rendered city on earth." --Bookforum "Petitjean's unique, frank, and intriguing account details with precision and wonder a rarely examined chapter in Kahlo's extraordinary life." --Booklist (starred review) "An intimate, unforgettable portrait of a brief but transformative time in Kahlo's life and of the turbulent beginnings of France's Surrealist Movement." --Foreword Reviews (starred review)

"[A] captivating biography...a perceptive portrait of an artist finding herself and learning to love and paint again. Fans of Kahlo's art and of the surrealist movement will want to give this thoughtful and illuminating work a look." --Publishers Weekly "A breezy bit of art history about a 1939 affair between the author's father and Frida Kahlo in Paris...the story is transportive and dreamy." --Kirkus Reviews

"Marc Petitjean grew up in Paris with a haunting picture by Frida Kahlo on the walls of his family's modest apartment. Decades later, a stranger asked him about his father's love affair with Frida. This revelation, out of the blue, spurred him to investigate what had happened between them. The result is an intimate portrait, beautifully written, not only of the two lovers, but of bohemian Paris, and its most influential figures, at a turning point in history: the eve of war, in 1939. The Heart beats suspensefully with real life." --Judith Thurman, author of Secrets of the Flesh: A Life of Colette "This book gives a poignant picture--part imagined and part true--of Frida Kahlo's days in Paris among other surrealists during a show of her paintings. It's told by the son of a French lover to whom she gave her powerful painting, The Heart, who was searching to understand his father better." --Laurie Lisle, author of Portrait of an Artist: A Biography of Georgia O'Keeffe and Louise Nevelson: A Passionate Life

"Incredibly lively and sensitive...a book that takes an important place in the bibliography of this modern Mexican heroine." --Connaissance des Arts "Superb...[Petitjean] enables us to discover the artistic Paris of the interwar period." --La Presse de la Manche "[Petitjean] paints a portrait as personal as it is perceptive of the intrepid Mexican [artist], while reviving the colors of the ebullient interwar art scene. Captivating." --Paris Match

Marc Petitjean is a writer, filmmaker, and photographer. He has directed several documentaries, including From Hiroshima to Fukushima, on Dr. Shuntaro Hida, a survivor of the atomic bombing of Hiroshima; Living Treasure, about Japanese kimono painter Kunihiko Moriguchi; and Zones grises, on his own search for information about the life of his father, Michel Petitjean, after his death. Adriana Hunter studied French and Drama at the University of London. She has translated more than eighty books, including Véronique Olmi's Bakhita and Hervé Le Tellier's Eléctrico W, winner of the French-American Foundation's 2013 Translation Prize in Fiction. She lives in Kent, England.
If the item details above aren’t accurate or complete, we want to know about it. Report incorrect product info.