The House on Calle Sombra - A Parable - by Marga Ortigas (Paperback) 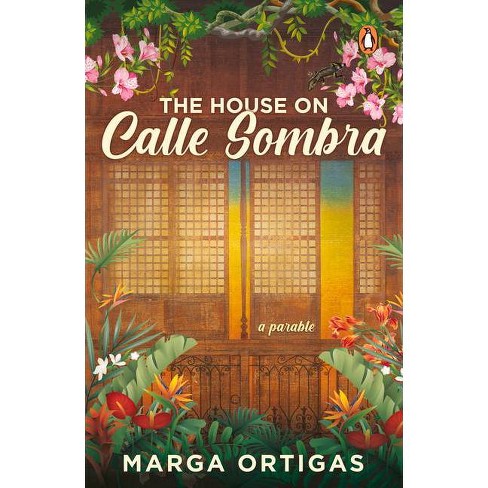 'Eye of a journalist, prose of a poet, an exotic tale delicately weaving a nation's history with a family's unravelling. A rags-to-riches parable, in an unfamiliar and evocatively recalled landscape, festooning the reader in garlands of uncanny self-realisation.'
-Nic Robertson, International Diplomatic Editor, CNN
'Marga Ortigas has written a stellar, soaring, gut-crunching multi-generational tale that is certain to set on edge the teeth of Manila's great and good. Like the tunnels in the book, this will take you into a world behind the curtain, revealing the universal truths concealed behind jewels, privilege and power.'
-Sheila Macvicar, Emmy, Peabody and duPont Award-winning international journalist
Ortigas is as well-measured as she is compelling in depicting the Castillos' 'original sin' as she seamlessly navigates the conceits and schemes of the Filipino elite across the time span of three generations.
-Javier Sicilia, Award-winning Mexican poet, novelist, and social activist, founder of the Movement for Peace with Justice and Dignity against the crime and violence of Mexico's drug war
PORTRAIT OF A MIXED RACE FAMILY GRAPPLING WITH IDENTITY AND BETRAYAL IN A TURBULENT TROPICAL ISLAND NATION
The House on Calle Sombra follows the fates and fortunes of the esteemed Castillo de Montijo family over three generations. Set in the Philippines--a tropical island nation where truth blends with fiction--none of the Castillos is quite as perceived. Successful patriarch Don Federico arrived from Spain a penniless orphan. Formidable matriarch Doña Fatimah is a native Muslim fugitive. And their brood of privileged descendants is struggling to live up to their famed and crested motto: FAMILY FIRST.
Mirroring events in the country's turbulent history, the Castillos' perfect façade begins to fracture as shadows from their past return to claim their due.
Sardonic, witty, and brutally frank, The House on Calle Sombra is an ode to family, and a compelling exploration of how greed, love, and trauma are passed down through generations.

'The author's fluid writing style and her ability to capture the nuances of Filipino inter-relationships make this novel a riveting and compelling read. It is storytelling at its best.'
-Cheche Lázaro, acclaimed Philippine broadcaster and journalism professor 'The House on Calle Sombra is an epic novel that deals with three generations of the Castillo de Montijo family. Like many Filipino families, the family has mixed bloodlines: Spanish, Muslim, surely layers of Malay and Chinese. The chapter headings and some dialogues are done in three languages--English, Spanish, and Filipino--to mirror the country's hybrid cultures. The family's youngest scion is a Tiresias on drugs: a photojournalist covering the Philippines' infamous anti-drug campaign. The epic sweep is told through a brisk prose style and fragmented sentences. At times, these beautiful sentences sound like heartbeats: quick, foretelling the love and doom in these marvellous pages.'
-Danton Remoto, Author of Riverrun, A Novel 'It's excellent. The novel is transportive, reminding me of 100 Years of Solitude I have never set foot there, but it made me feel like I knew the Philippines. The author beautifully describes the rich, complex structures of society, and deftly deconstructs the conditionality of religion, social status, a colonial past, and race.'
-Dr. Neven Andjelic, journalist, author, and Assistant Professor in International Relations and Human Rights, Regent's University London 'I loved it. The author's keen journalist's eye and deep understanding of the human condition have created a panoply of unforgettable characters and an inescapable world that stays with you long after you turn the last page.'
-Cal Perry, Correspondent, NBC News 'A beautifully crafted debut novel from Marga Ortigas. I found The House on Calle Sombra to be a moving and complex family saga layered against the backdrop of fictionalised Philippine history.'
-Marc Ocampo, Arts Manager, Arts & Creative Industries, British Council Philippines 'In her first novel, Ortigas takes us on an intimate exploration of the powerful Castillo de Montijo's family history. The novel skilfully weaves together the destiny of the Castillo lineage with the secrets of its past. Thus, unfurling a complex plot where we can trace the origin of the family's fortune deep into the dark pits of its initial motives and ensuing political alliances. In The House on Calle Sombra, a family's fate is set against the destructive power of systemic violence. In our time, this very type of violence is conspicuously representative of nations where the ruling class along with the structures of governance have grown weaker under the ever-expanding influence of organized crime. Perhaps this is Ortigas' greatest literary achievement, a well-earned balance in her portrayal of that mysterious place where the inner and outer narratives of our lives come to intersect.'
-Javier Sicilia, Award-winning Mexican poet, novelist, and social activist, founder of the Movement for Peace with Justice and Dignity against the crime and violence of Mexico's drug war "Funny, juicy and sad. Each time I pick up the book it's like being in on a juicy lunch time gossip session about a prominent family--except this one is fictional but feels so real." --The Manila Times

Marga Ortigas has travelled the world as a journalist for three decades, with a career spanning five continents and two of the largest global news networks. After getting her start in the Philippines, she joined CNN in London, working across Europe and covering the war in Iraq from its inception. In 2006, she returned to Manila and the Asia Pacific region, reporting from the frontlines of armed conflict and climate change as senior correspondent for Al Jazeera.
If the item details above aren’t accurate or complete, we want to know about it.

The Messy Lives of Book People - by Phaedra Patrick

The Sweetness of Forgetting - by Kristin Harmel (Paperback)

When We Meet Again - by Kristin Harmel (Paperback)

The Parable of the Coal - by Matthew Swan (Paperback)

Einstein For Dummies - by Carlos I Calle (Paperback)

Parable of Hide and Seek - by Chad Sweeney (Paperback)

Forever Holding Phil - (There Is a Season...) by Calle J Brookes (Paperback)