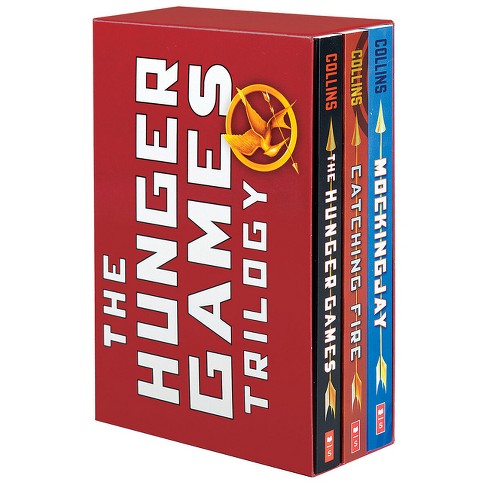 Collins' extraordinary Hunger Games trilogy is now available in a special edition box set featuring the original cover artwork from the groundbreaking, bestselling trilogy. A perfect gift for fans of the books or movies.

Suzanne Collins's worldwide-bestselling Hunger Games trilogy is now available in a paperback box set! This edition features the books with the classic cover art in a striking new package.Now available, a paperback box set of the Hunger Games! This box set features the original cover artwork from the ground-breaking, bestselling trilogy. A perfect gift for fans of the books or movies.In the ruins of a place once known as North America lies the nation of Panem, a shining Capitol surrounded by twelve outlying districts. The Capitol keeps the districts in line by forcing them all to send one boy and one girl between the ages of twelve and eighteen to participate in the annual Hunger Games, a fight to the death on live TV.Sixteen-year-old Katniss Everdeen regards it as a death sentence when she steps forward to take her sister's place in the Games. Without really meaning to, she becomes a contender. But if she is to win, she will have to start making choices that weigh survival against humanity and life against love.

Suzanne Collins is the author of the bestselling Underland Chronicles series, which started with Gregor the Overlander. Her groundbreaking young adult novels, The Hunger Games, Catching Fire, and Mockingjay, were New York Times bestsellers, received wide praise, and were the basis for four popular films. She returned to the world of Panem with The Ballad of Songbirds and Snakes. Year of the Jungle, her picture book based on the year her father was deployed in Vietnam, was published in 2013 to great critical acclaim. To date, her books have been published in fifty-three languages around the world.
If the item details above aren’t accurate or complete, we want to know about it.

YOU WILL NOT BE DISAPOINTED

5 out of 5 stars
Would recommend
Ashley - 1 month ago
When I tell you this is a book I cannot get over I’m not kidding. This book series is so well written & makes you want to keep on reading to see what happens next. I would definitely recommend listening to this book series on audible if you don’t like actually reading the books yourself. I listened to it on audible and it feels like I’m watching the movies all over again but BETTER ! this series makes me have a book hang over every time I read it . 100% recommend
Did you find this review helpful?

5 out of 5 stars
Would recommend
Laundry detergent pods - 1 year ago, Verified purchaser
Collins writes a fine dystopia fraught with ethical dilemmas and peril. This is a great read for teens and adults.
4 guests found this review helpful. Did you?