The Ice Beneath Her - (Hanne Lagerlind-Schon) by Camilla Grebe (Hardcover) 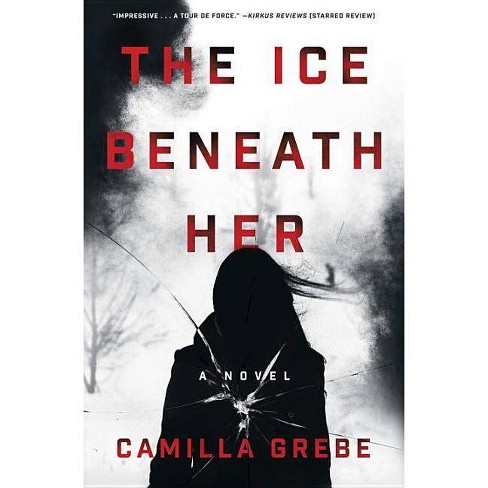 "This English translation was originally published in the United Kingdom by Bonnier Zaffre, London, in 2016"--T.p. verso.

Acclaimed Swedish author Camilla Grebe makes her solo American debut with a psychological thriller as cunning in its twists as it is captivating in its storytelling--for fans of the celebrated crime fiction of Camilla Läckberg, Jo Nesbø, Ruth Ware, and Fiona Barton. Winter's chill has descended on Stockholm as police arrive at the scene of a shocking murder. An unidentified woman lies beheaded in a posh suburban home--a brutal crime made all the more disturbing by its uncanny resemblance to an unsolved killing ten years earlier. But this time there's a suspect: the charismatic and controversial chain-store CEO Jesper Orre, who owns the home but is nowhere to be found. To homicide detectives Peter Lindgren and Manfred Olsson, nothing about the suave, high-profile businessman--including a playboy reputation and rumors of financial misdeeds--suggests he conceals the dark heart and twisted mind of a cold-blooded killer. In search of a motive, Lindgren and Olsson turn to the brilliant criminal profiler Hanne Lagerlind-Schön. Once a valued police asset, now marooned in unhappy retirement and a crumbling marriage, she's eager to exercise her keen skills again--and offer the detectives a window into the secret soul of Jesper Orre. But they're not the only ones searching. Two months before, Emma Bohman, a young clerk at Orre's company, chanced to meet the charming chief executive, and romance swiftly bloomed. Almost as quickly as the passionate affair ignited, it was over when Orre inexplicably disappeared. One staggering misfortune after another followed, leaving Emma certain that her runaway lover was to blame and transforming her confusion and heartbreak into anger. Now, pursuing the same mysterious man for different reasons, Emma and the police are destined to cross paths in a chilling dance of obsession, vengeance, madness, and love gone hellishly wrong.

Praise for The Ice Beneath Her "Exceptional."--Publishers Weekly (starred review) "Impressive . . . a tour de force that lifts its author to the front rank among the increasingly crowded field of Nordic noir."--Kirkus Reviews (starred review) "The Ice Beneath Her deserves to be called a page-turner--I read it in one sitting! The narrative is fast-paced and the twists superb."--Cecilia Ekbäck, bestselling author of Wolf Winter

"Exceptional."--Publishers Weekly (starred review) "Impressive . . . a tour de force that lifts its author to the front rank among the increasingly crowded field of Nordic noir."--Kirkus Reviews (starred review) "The Ice Beneath Her deserves to be called a page-turner--I read it in one sitting! The narrative is fast-paced and the twists superb."--Cecilia Ekbäck, bestselling author of Wolf Winter "Slowly and subtly, Camilla Grebe lets The Ice Beneath Her unfold into a multilayered, psychologically nuanced murder mystery in which the truth, rather than drawing nearer, keeps slipping further and further away--until it strikes with full force."--Arne Dahl, bestselling author of Misterioso "Tense, gripping, and utterly unpredictable . . . Camilla Grebe is an extraordinarily gifted writer and a master of suspense."--Kristina Ohlsson, bestselling author of Unwanted

Camilla Grebe was born in 1968 in Alvsjo, Sweden. She holds a degree from the Stockholm School of Economics and was a cofounder of audiobook publisher Storyside. Together with her sister Åsa Träff she has written five celebrated crime novels. The first two books in that series were nominated for Best Swedish Crime Novel of the Year. Grebe has also co-written the popular Moscow Noir trilogy.
If the item details above aren’t accurate or complete, we want to know about it. Report incorrect product info.