The Illusion of Certainty - by James T Houk (Paperback) 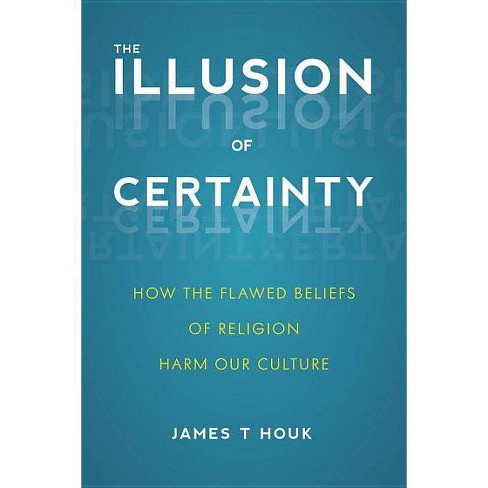 ""An insightful, comprehensive treatise explaining the logical constructs underlying religious thought, the logical fallacies prevalent in theories defending religious ideas, and the resulting contradictions that arise when belief supersedes logic and data. Dr. Houk's expertise and vast knowledge guide us through each facet of the religious experience. He provides thoughtful commentary as well as detailed evidence to support his arguments. This book is a great read that will serve as an outstanding reference for years to come!" --Benjamin Wolozin, MD, PhD, Professor of Pharmacology and Neurology, Boston University School of Medicine "The human brain is captivated by certainty and belief systems built on the illusion that it's attainable. The Illusion of Certainty deconstructs this tendency and reveals the many shortcomings of belief systems that have motivated countless injustices and horrors in the name of being 'right.' It's a welcomed addition that will open many eyes." --David DiSalvo, author of What Makes Your Brain Happy and Why You Should Do the Opposite "The Illusion of Certainty dispels the darkness of fundamentalist absolutism in short order, holding up the light of humanism and making a sure case for science and reason--as well as mutual tolerance--worldwide. A penetrating analysis." --Joe Nickell, Senior Research Fellow, Committee for Skeptical Inquiry and author of The Science of Miracles "Houk pulls no punches in this provocative challenge to religious claims and their contributions to the polarizing "cultural wars" of postmodern society. The "illusion of certainty" that Houk unmasks describes not only the anti-intellectualism of contemporary religious fundamentalism in its various forms, but it also poses a challenge to the very survival of our species. Taking on issues from young-earth creationism to the classic problem of evil in monotheistic traditions, Houk argues that we dismiss such issues as matters of mere "belief" at our peril." --Rodger M. Payne, Chair, Department of Religious Studies at the University of North Carolina Asheville "Houk clearly demonstrates the importance of epistemology and evidence in his critique of religious fundamentalism. His analysis of the errors rooted in fundamentalism's 'faith-based epistemology' is convincingly argued and based on solid research." --Barbara Forrest, coauthor with Paul R. Gross of Creationism's Trojan Horse: The Wedge of Intelligent Design and expert witness for the plaintiffs in Kitzmiller et al. v. Dover Area School District "Biblical literalists will have more than they can handle in this engagingly wicked book. Combining relativism, rationalism, and a liberal dose of snark, Houk takes careful aim at the ostentatiously and ignorantly pious. The result is a withering attack on religious fundamentalism and creationism, and some important schooling about the Bible!" --Jonathan Marks, anthropologist and author of Tales of the Ex-Apes "This very powerful and informative book exposes the illusion of certainty borne of religious fundamentalism for what it really is, unsubstantiated ignorant beliefs that masquerade as certainty. Using several key examples, Houk illustrates that 'virtually anything and everything, no matter how absurd, inane, or ridiculous, has been believed or claimed to be true at one time or another by somebody, somewhere in the name of faith.' He proves that to adopt faith-based claims with blind certainty has caused untold misery and death and must be jettisoned from modern life if we want a good society. Excellent and highly recommended!" --John W. Loftus, author of Why I Became an Atheist, The Outsider Test for Faith, and Unapologetic: Why Philosophy of Religion Must End "Have you ever wondered how the majority of humans are religious, but their religions teach them entirely different things about the world we live in, the nature of divinity, and the human condition? This polemical book discusses these issues, and many more, in detail. The author's thesis is that since everyone would agree that not all religions (thousands of them) are correct, it must be the case that none of them are correct. Yet this obvious contradiction is generally ignored. Religion is not subject to rational or empirical tests, and when it wanders into the realm of science or historical fact (as in the heliocentric theory or the age of the earth) it does very poorly. The book demolishes the idea that religion teaches universal moral truths, quoting as an example the instruction from "God" to the Israeli invaders of Canaan to kill every man, woman, and child, and the command that a parent kill any son who drifts into alternative religions. Its fact-filled pages also include a devastating critique of Creationism (informed by the author's experience teaching science to college students in Louisiana). Unfortunately, this fine book is unlikely to be read by those who need it most, but skeptics will want to have it on their bookshelves." --David Morrison, Committee for Skeptical Inquiry Fellow
If the item details above aren’t accurate or complete, we want to know about it. Report incorrect product info.