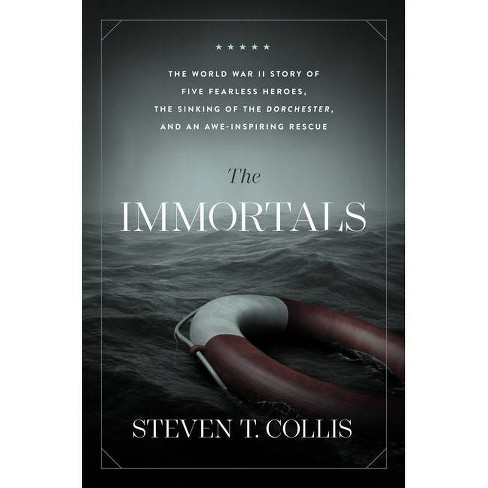 The story of the heroic actions of chaplains George Fox, Alexander Goode, John Washington, and Clark Poling of the Dorchester and steward's mate Charles W. David Jr. of the Comanche in the aftermath of a German submarine attack during World War II.

During World War II, on January 29, 1943, the SS Dorchester and a small convoy sailed the perilous route from Newfoundland to the Army Command Base in Greenland. Four chaplains were assigned to the Dorchester with more than 900 men on board. Alexander Goode, a Jewish rabbi; John Washington, a Catholic priest; George Fox, a Methodist minister; and Clark Poling, a Baptist minister, all offered comfort, reassurances, and prayers with a warning from the captain that a German submarine was hunting their convoy. The Nazi U-boat captain, Karl-Jurg Wachter, had been stalking the Americans for days When the weather finally gave him an opening, Wachter was in a position to strike.

Just past midnight, on February 3, just hours from their destination, the Dorchester was torpedoed and sank, throwing its passengers into the frigid waters and creating the worst single loss of an American personnel convoy during WWII. Many of the survivors credit the four chaplains with saving their lives. Those chaplains would become known as "The Immortal Chaplains" for their heroism in making the ultimate sacrifice. With no thought of themselves, they calmly helped men to safety through the chaos of their badly damaged ship, searched for spare life jackets for those without--eventually giving away their own life jackets and encouraging men in the freezing waters.

The celebrated story of the Immortal Chaplains is now joined for the first time in print by the largely untold story of another hero of the sinking of the Dorchester: Charles Walter David, Jr. was a young Black petty officer aboard a Coast Guard cutter traveling with the convoy who bravely dived into the glacial water over and over again, even with hypothermia setting in, to try to rescue the men the chaplains had first helped and inspired to never give up. Through his efforts, he joins the Chaplains as one of "The Immortals."

Thoroughly researched and told in an engrossing non-fiction narrative, the book alternates between accounts told from the perspective of the Nazi U-boat captain and his crew (as found in their journals and later interviews), and the hunted--the men of the American convoy. Using his expertise as a law professorspecializing in religious freedom and constitutional law, the author, Steven T. Collis, also paints a thought-provoking portrait of religious life in America during wartime and how American views of faith affected the chaplains and the men they served.

Page-turning and inspiring, The Immortals explores the power of faith and religious conviction and powerfully narrates the lives of five heroic men who believed in something greater than themselves, living lives of service and sacrifice for their country and their fellow man.

"Collis recounts the story of four U.S. Army chaplains of different faiths who sacrificed everything for the 900 soldiers in their charge when their ship sinks after a 1943 torpedo attack in the icy North Atlantic. His meticulous research and deep understanding of the need for and purpose of military chaplains shines through. The newly recognized fifth member of the Immortals is Charles David Jr., a Black Coast Guard steward's mate who demonstrated immeasurable courage during the rescue of survivors as he dove repeatedly into the freezing water to save as many sailors as he could. While the four chaplains' stories are well-established, Collis is the first to tell David's extraordinary story, writing with passion and insight about his 'awe-inspiring' valor and the impact of spiritual service. This truly moving book infuses the tale of the Immortals with new and elevating importance."-- "Booklist"

Steven T. Collis a law professor at the University of Texas at Austin, founding director of the school's religious freedom clinic, and founding faculty director of Texas's Bech-Laughlin First Amendment Center. He received an MFA in creative writing from Virginia Commonwealth University, and graduated from the University of Michigan Law School. He is the author of Deep Conviction: True Stories of Ordinary Americans Fighting for the Freedom to Live Their Beliefs. He and his wife are parents to four children.
If the item details above aren’t accurate or complete, we want to know about it. Report incorrect product info.