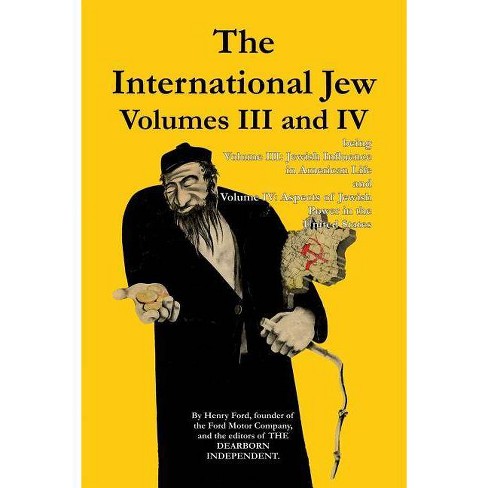 The only complete set of all 80 unexpurgated articles published by the famous American industrialist and automobile manufacturer Henry Ford in his Dearborn Independent newspaper between 1920 and 1922.

The topics included foreign and domestic politics, finance, the movie industry, stage and theater, the agricultural sector, media control and manufacturing, and contains by far the best analysis of how the United States was systematically taken over by Jews after they were allowed to immigrate to that than country in large numbers in the late 19th century.

The work's reach was worldwide and was quoted in Adolf Hitler's Mein Kampf. Henry Ford's picture hung in Hitler's office, and in July 1938, the German consul at Cleveland gave Ford, on his 75th birthday, the award of the Grand Cross of the German Eagle, the highest medal Nazi Germany could bestow on a foreigner.

The 80 articles were later republished in book form but were severely redacted and edited, with an severely abridged version becoming the most widely circulated copy.

Originally published by The Dearborn Independent as a four volume set, this new completely reset edition combines all the volumes into a handy two volume version, without losing any of the text. Completely reset and hand-edited.

Volume III and IV contain the second set of 38 articles, while the companion Volume I and II contains the first 42 articles.

Cover image: A poster from the Nazi film The Eternal Jew (1940) which used material from Ford's books.