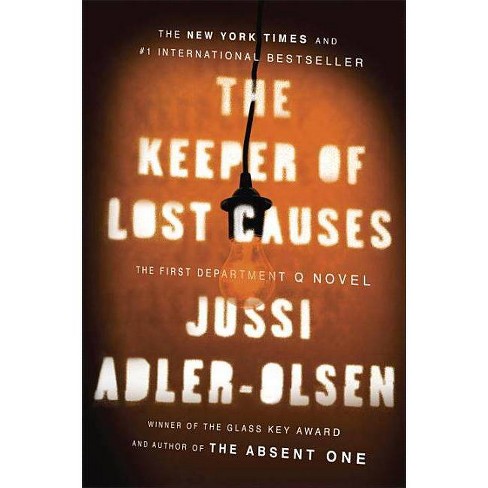 "The Keeper of Lost Causes" features a deeply flawed chief detective who's been selected to run Department Q, a new special investigations division that turns out to be a department of one.

Get to know the detective in charge of Copenhagen's coldest cases in the first electrifying Department Q mystery from New York Times bestselling author Jussi Adler-Olsen. Carl Mørck used to be one of Denmark's best homicide detectives. Then a hail of bullets destroyed the lives of two fellow cops, and Carl--who didn't draw his weapon--blames himself. So a promotion is the last thing he expects. But Department Q is a department of one, and Carl's got only a stack of cold cases for company. His colleagues snicker, but Carl may have the last laugh, because one file keeps nagging at him: a liberal politician vanished five years earlier and is presumed dead. But she isn't dead...yet. Darkly humorous, propulsive, and atmospheric, The Keeper of Lost Causes introduces American readers to the mega-bestselling series fast becoming an international sensation.

"The pages fly by as the twisty puzzle unfolds. Stieg Larsson fans will be delighted."--Publishers Weekly (starred review) "Far from being just another morose Nordic crime writer, Adler-Olsen creates a detective whose curiosity is as active as his soul is tortured."--Library Journal (starred review) "Adler-Olsen's prose is superior to Larsson's, his tortures are less discomfiting, and he has a sense of humor."--Booklist (starred review) "The new 'it' boy of Nordic Noir."--The Times (London) "The Keeper of Lost Causes is dark, atmospheric, and compelling. Those who loved The Girl with the Dragon Tattoo will devour this book."--#1 New York Times bestselling author C. J. Box More Praise for Jussi Adler-Olsen's Department Q series "If you like the dark humor, wisecracking, and layered betrayals of Raymond Chandler, then read Adler-Olsen's Department Q series."--Men's Journal "A tense, pleasurable read."--USA Today "[A] sordid tale...inspired by actual events during a dark period of Danish history. Ah, but there is more, so much more in this frenzied thriller."--The New York Times Book Review "This book is not for the faint of heart, but for readers who enjoy dark humor and wisecracking heroes and heroines, you'll love Department Q."--Suspense Magazine "It can be hard to distinguish Scandinavian crime writers--there are a lot of them, and their names have consonant clusters and umlauts and all that jazz--but Jussi Adler-Olsen is a name to know. In a crowded genre, Adler-Olsen is an outlier."--GQ.com "Adler-Olsen merges story lines...with ingenious aplomb, effortlessly mixing hilarities with horrors...This crime fiction tour de force could only have been devised by an author who can even turn stomach flu into a belly laugh."--Publishers Weekly (starred review) "This series has enough twists to captivate contemporary mystery readers and enough substance and background to entertain readers with historical and literary tastes."--Library Journal (starred review) "When your series relies on cold cases, it's not always easy to craft plots that have both historical interest and an air of urgency, but it's something Adler-Olsen is very good at."--Booklist

Jussi Adler-Olsen is Denmark's #1 crime writer and a New York Times bestselling author. His books, including the Department Q series, routinely top the bestseller lists in Europe and have sold more than fifteen million copies around the world. His many prestigious Nordic crime-writing awards include the Glass Key Award, also won by Henning Mankell, Jo Nesbø, Stieg Larsson, and Peter Høeg.
If the item details above aren’t accurate or complete, we want to know about it.

The Department of Rare Books and Special Collections - by Eva Jurczyk

Woman on Fire - by Lisa Barr