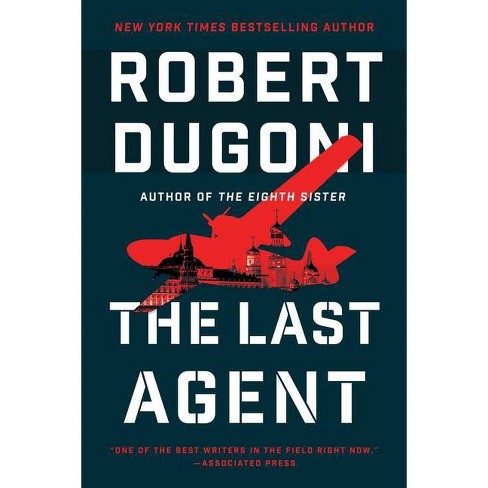 $24.95
undefined out of 5 stars with 0 reviews
be the first!be the first! ratings
Help us improve this page

"Betrayed by his own country and tried for treason, former spy Charles Jenkins survived an undercover Russian operation gone wrong. Exonerated, bitter, and safe, the retired family man is through with duplicitous spy games. Then he learns of a woman isolated in Moscow's notorious Lefortovo Prison. If it's Paulina Ponomayova, the agent who sacrificed her life to save his, Jenkins can't leave her behind. But there's no guarantee it's her--or proof Paulina is still alive. To find out, Jenkins must return to Russia"--Dust jacket flap.

An American operative in Russia is on the run for his life in a thriller of heart-stopping betrayal and international intrigue by the New York Times bestselling author of The Eighth Sister.

Betrayed by his own country and tried for treason, former spy Charles Jenkins survived an undercover Russian operation gone wrong. Exonerated, bitter, and safe, the retired family man is through with duplicitous spy games. Then he learns of a woman isolated in Moscow's notorious Lefortovo Prison.

If it's Paulina Ponomayova, the agent who sacrificed her life to save his, Jenkins can't leave her behind. But there's no guarantee it's her. Or proof Paulina is still alive. To find out, Jenkins must return to Russia. Next move: blackmail Viktor Federov, a former Russian officer with his own ax to grind, into helping him infiltrate Lefortovo. The enemy who once pursued Jenkins across three continents is now the only man Jenkins can trust.

Every step of the way--from Moscow to Scandinavia to the open ocean--they're hunted by a brutal Russian agent on a killer quest of his own. Out of loyalty to Paulina--dead or alive--Jenkins is putting everyone's life on the line for a new mission that could be his last.

"The Last Agent brings Robert Dugoni's latest stellar protagonist Charles Jenkins back to the page with spectacular results...More known for his psychological and legal thrillers, [Dugoni] seems to be channeling his inner Daniel Silva, or even John le Carre, here. That's because the latest escapade in which Jenkins becomes embroiled sees him returning to his former spy haunts in Russia, literally going back into the cold as opposed to coming in from it...Espionage writing doesn't get any better than Dugoni's shrewd take on the state of U.S.-Russian relations, as he proves to be not just a literary jack of all trades, but a master of all of them." --Providence Journal

"In bestseller Dugoni's fast and furious sequel to 2019's The Eighth Sister...Dugoni writes with such immediacy that readers will feel as if they're standing alongside Jenkins as he contemplates his next death-defying move. Fans of espionage fiction are in for a high-octane thrill ride." --Publishers Weekly

"If you love international intrigue and spy thrillers, this heart-stopper is a must-read!" --Medium

"If you're searching for a great international spy thriller, look no further. Stuffed with more action and espionage than most writers can cram into two books, Robert Dugoni's The Last Agent is fast, unflinching, and absolutely fantastic." --The Real Book Spy

"With well-written characters, fantastic plot, surprises every time you think you know what is coming and moments that will have your heart racing as if you're the one in danger, you really can't go wrong with the Charles Jenkins series." --Looking Glass Reads

"All I can say is, wow. [Dugoni] knocked it way out of the park on this one." --The Mountain Times

"A fast and fascinating read, this book should really please all of Dugoni's fans..." --Mystery & Suspense

"The thriller equivalent of a Matryoshka nesting doll: an outer layer of geopolitics; a deeper layer of intricate spycraft; and at its center, an unlikely alliance to save a brave Russian asset from the worst fate imaginable." --Barry Eisler, New York Times bestselling author

"Fast paced and mesmerizing from start to finish. Dugoni flawlessly executes one of the best spy novels I've read in years. The Last Agent grabs you and doesn't let go--one twist and turn after the other had me tearing through the pages." --Steven Konkoly, USA Today bestselling author

Praise for The Charles Jenkins Series and Robert Dugoni

"A gripping thriller...[The Eighth Sister] is destined to be a classic in the genre, and Dugoni is arguably one of the best writers in the field right now." --Associated Press

"The Eighth Sister is a great mix of spycraft and classic adventure, with a map of Moscow in hand." --Martin Cruz Smith, international bestselling author

"Feels so fresh and authentic we could see the story breaking in the headlines tomorrow." --Mark Sullivan, bestselling author of Beneath a Scarlet Sky

"Dugoni delivers an exceptionally gripping spy thriller that will keep readers on the edge of their seats." --Publishers Weekly (starred review)

"[Dugoni] has outdone himself here, serving up a double-barrelled blast of action mixed with espionage in what's perhaps his most unputdownable thriller yet...Treason, moles, and plenty of misdirection...Robert Dugoni's The Eighth Sister is a high-stakes game between spies, and he doesn't take his foot off the gas pedal for a second." --The Real Book Spy

"With lean prose and spot-on local color, this plot-driven thriller pulses with tension and fraught escapes, the action capped by a courtroom drama as good as any from Grisham. A must-read for fans of legal thrillers and/or spy novels." -- Library Journal (starred review)

"If you've eagerly devoured [Dugoni's] previous works for their cinematic pacing, tautly written thrills, and wonderfully developed characters, you're in for all of that and so much more with [ The Eighth Sister]." --Bookreporter