The Last Days of Letterman - by Scott Ryan (Paperback) 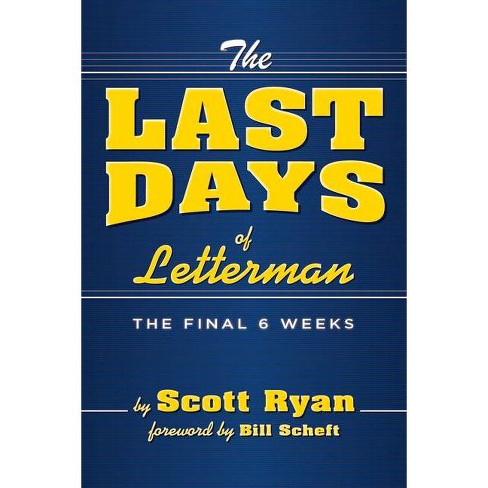 On May 20, 2015, Dave said, "Thank you and goodnight." The Foo Fighters sang "Everlong," and Late Show with David Letterman ended its run. The final six weeks of the series had guests like Julia Roberts, George Clooney, Oprah Winfrey, and the Obamas. All names you have heard many times. But it was the people behind the scenes who pulled off these twenty-eight unforgettable episodes of late-night television.

Author Scott Ryan conducted over twenty interviews with the staffers of David Letterman. Most of the participants had never given interviews before. The writers, directors, producers, and stage managers offer a behind-the-scenes look at what it was like to work on these shows. Find out what it takes to write a Top Ten list, book a president for a guest spot, and what it was like working at the Ed Sullivan Theater.

Long time Letterman writer Bill Scheft penned the foreword for the book. Included are over 100 color photos from staffers' personal collections, as well as publicity photos from the show. Get the first truly inside look at creating an episode of Late Show.

"The last six weeks at The Late Show were undoubtably the highlight of my career; it was also the end of my thirty-five years in television. A bittersweet time. I'm delighted that Scott Ryan has decided to immortalize those days with a book." -- Barbara Gaines, Executive Producer of The Late Show and Late Night for 33 years.

"The monologue chapter is a must-read for people who work in that strange craft and I think the general public will get a lot of insight about the unsung heroes of late night TV" -- Jim Mulholland, The Tonight Show With Johnny Carson, writer.

Scott Ryan is the author of The Last Days of Letterman (2018), thirtysomething at thirty: an oral history (2017). He wrote a comic essay book, Scott Luck Stories (2014) about his time as a stay at home dad. He is the editor of The Women of David Lynch (2019), He is the managing editor of the Twin Peaks magazine, The Blue Rose. He is a founding partner of Fayetteville Mafia Press. His writing has been published in The Sondheim Review and Fan Phenomena: Twin Peaks (Intellect Press). He wrote and directed the independent films Meet Abby and A Voyage to Twin Peaks . He is the host of the podcasts Red Room Podcast, Scott Luck Stories, and The thirtysomething Podcast. He lives in Columbus, Oh, is married, and has 4 kids.

Novelist, columnist, television writer. During the last three decades, Bill Scheft has established himself as a versatile, singular and influential comedic voice. After twelve years touring as a stand-up comedian, Scheft was hired as a monologue writer for Late Night with David Letterman where he remained until the show's conclusion in May, 2015. During his 24 years with Letterman, he was nominated for 16 Emmys. Which, ah, means he never won. A frequent creative presence on award shows, roasts and television specials, Scheft wrote for the 1995 and 2005 Academy Awards, was the head writer for three ESPY Awards and has contributed special material to the Emmys, Tonys and Grammys.