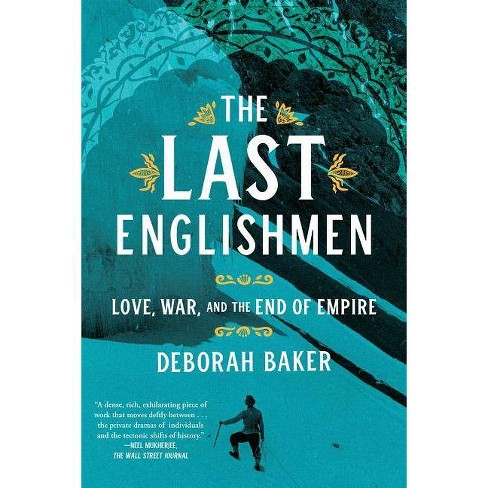 $13.29
MSRP$18.00
no reviews yet
be the first!be the first! ratings
Shipping
Free standard shipping with RedCard
Loading, please wait...
Help us improve this page

"In her ambitious new book, The Last Englishmen: Love, War, and the End of Empire, [Deborah Baker] brings to bear this art of juxtaposition upon a much-told story, the last two decades of the British Empire in India, to create something wholly original. . . . It is to Ms. Baker's credit that she keeps the big events always in view, dramatizing and humanizing the workings of history, particularly the story of empire and its machinations, in a way a novelist would--by making it a story of individuals. She understands everything about these people, the details of their lives, the connections and the criss-crossings, intersections, overlaps, friends-of-lovers-of-friends. It wouldn't be an exaggeration to say that there is something Tolstoyan to her vast project."--The Wall Street Journal

"Ms. Baker draws from a rich stock of unpublished memoirs, journals, police reports and other documents, deploying fresh material with a light touch. . . . As narrative history this is skillful work."--The Economist

"What the deeply researched, marvelously portrayed life stories recounted in The Last Englishmen show is just how muddled these world-historical changes actually look when you're living in the middle of them. That makes the book a valuable supplement to the more conventional accounts of decolonization as a process driven by clear-eyed activists and historical logic. If anything, histories like Baker's may be precisely what are needed in the present heated moment, as reminders of the many ways in which people find their way through political transformation."--Foreign Affairs

"Incisive and illuminating. . . . This is a thoroughly researched, relentlessly engrossing epic tale. Baker is adept in all areas -- on the slopes of Everest or within corridors of power, among Calcutta's intellectuals or London's art crowd. She writes with verve and authority on colonial tension, cultural achievement and global conflict. . . . Baker's study of national endeavor and personal struggle throws a valuable light on past upheavals and ideals. There is much to admire and a lot to learn."--Star Tribune (Minneapolis)

"An extraordinarily deft account of the complexities of love and empire, in India and Britain, from the 1920s through independence and partition in 1947 and beyond."--BookPost

"A fascinating ensemble drama that elegantly brings to life that slice of time around World War II and the waning days of British control over India."--The National Book Review

"A Pulitzer Prize and National Book Award finalist takes readers on a journey through the Indian subcontinent at the closing of the British Empire. . . . Seemingly covering disparate topics, Baker beautifully connects them all with an incisive, clear writing style and sharp descriptions of the terrain."--Kirkus Reviews, starred review

"[The Last Englishmen is] her most creatively conceived, deeply delving, and wizardly blend of biography and history to date."--Booklist, starred review

"An elegant and complex narrative of India and the British Empire. . . . Baker skillfully navigates numerous interlaced tales, illuminating in a lively and stylistic fashion both the inner lives of intriguing individuals and weightier geopolitical developments."--Publishers Weekly

"Baker's talent for crafting an intriguing narrative provides thorough views of the characters and settings involved. . . . [Her] angle is distinct in its use of Auden and Spender's stories to mirror Britain's struggle to maintain its position of power."--Library Journal