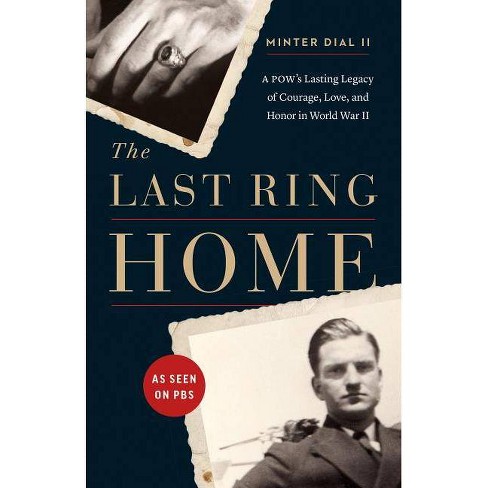 $17.69
MSRP$25.95
no reviews yet
be the first!be the first! ratings
Shipping
Free standard shipping with RedCard
Help us improve this page

****The Last Ring Home has been officially announced as winner of the Book Excellence Award 2018 in the category of Biography.****

The subject of an award-winning documentary film that was broadcast nationally on PBS and History Channel (ANZ), The Last Ring Home is a spellbinding account of one man's obsession with a family mystery--and the product of decades of research and inquiries. The book relates author Minter Dial's pursuit of the true story of his namesake, his late grandfather Lt. Minter Dial, USN, a celebrated war hero whose suffering and trauma nearly buried his memory forever.

A prisoner of the Japanese in the Philippines after the fall of Bataan and Corregidor, Lt. Dial discovered the cruelest meaning of the Bushido code. Moments before he was killed, he gave his treasured Naval Academy ring to a friend. In the ensuing chaos, it disappeared.

Armed with a passion for history and a desire to uncover his grandfather's legacy, Dial's epic quest for the ring transports him to prisoner-of-war memorials and ex-POW conventions, military and press archives, and the homes of those affected by the Second World War across the world.

Sweeping as far back as the American Civil War, The Last Ring Home combines rigorous research with more than one hundred interviews with experts, survivors, and descendants of the Greatest Generation to tell the powerful story of American prisoners of war in the Pacific.