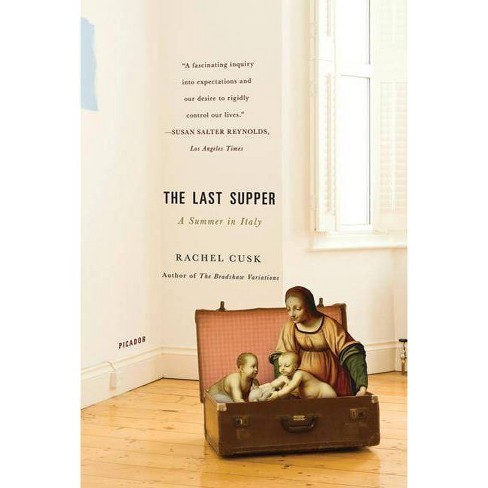 "[A] fine, exultant book . . . Praise be . . . for novelist Rachel Cusk, who brings to her three-month sojourn in Italy a characteristic strangeness and charm." --Olivia Laing, The Observer (London)

"A writer of almost electrifying intensity . . . [Cusk's] rigorous intellect is always at play, whether she's writing about a tomato or a tomb, and it is this very archness, this passion, that gives her beautiful, moving book such power. Indeed, her detailed examination of the tiny nuances that embroider family life gives her account of her Italian summer the kind of luminosity she seeks, and finds, in visual art." --Hilary Fannin, The Irish Times

"Cusk is often bracing and rigorous, . . . applying her phrases like the brushstrokes of the masters she so admires. This is the finest memoir of Italy I have read since--twenty years ago more or less--Jonathan Keates' Italian Journeys made Italy suddenly seem irresistible and present in all its dimensions. Cusk makes Italy sing." --Tom Adair, The Scotsman

"The traumatic juxtaposition of sublime paintings and tourist tat inspires Cusk to writing that will sit honourably in an anthology with Byron and Forster . . . Travel writing about Italy might be an oversubscribed genre, but The Last Supper more than earns its place at the table." --Celia Brayfield, The Times (London)

"[Cusk] writes with the intelligence, wit, and keen eye for detail demanded by any kind of reporting." --The New Yorker

"A fascinating inquiry into expectations and our desire to rigidly control our lives." --Los Angeles Times

"There's a reason for the unrelenting stream of literature about moving to Italy--it's everyone's fantasy. Cusk details her family's three-month tour of the country in this delightful romp through rented villas, Amalfi beaches and plenty of pasta and gelato." --More

"Engaging. . . 'The Last Supper: A Summer in Italy' is not your typical rosemary-scented, ready-for-cable ode to renovating a rustic house and rubbing shoulders with jolly peasants. A very talented novelist and observer, Cusk has a knack for drilling down into the thick of things and finding strangeness in even the most ordinary experiences.. . . The author approaches everything she sees through the prism of history and literature, allowing herself to be captivated by her surroundings even while she is trying desperately to detach herself from the tourists all around. Cusk may hate tourists -- her descriptions of them are usually hilarious and sometimes cruel--but she makes a passionate, sharp-tongued tour guide in this book about fleeing the ordinary in search of something beautiful." --Salon

"Charming, restless, idiosyncratic hybrid of classic family road trip and probing personal essay where the roadside attractions include Pompeii, the Basilica of Saint Francis and Etruscan tombs, and the big questions on aesthetics and truth and human nature that such sites elicit are smartly explored . . . improvisatory and sensual." --San Francisco Chronicle

"Unlike day-tripping tourists, the thoughtful visitor doesn't know in advance what will seize her attention. A basket of bread and tomatoes, a Raphael Madonna, a storm that breaks with terrible beauty over the Ligurian coast, the progressively gothic hostelries through which the travelers wend their way home: All are fleetingly illumined by Cusk's exquisite prose, though none more hauntingly than the predawn English countryside, "like a sleeping baby . . . somehow new and unmarked, '' from which they set off for their summer abroad." --Boston Globe

"Cusk takes us from Tuscany and Umbria south to Naples and Capri, writing throughout in the present tense, which makes the journey more immediate, and in the minimalist shorthand of a Raymond Carver short story: 'The fireflies scatter in drifts, like embers'; 'There is a bang at the door: It is a man.' There are several nice takes on food, history and landscape, and splendid observations on artists, as when she writes of Cimabue, that 'he restored to the painted human form its softness and mortality, its animal nature and the grandeur of its emotion." --Providence Journal

"British novelist Rachel Cusk's The Last Supper is a perceptive account of the pleasures and perils that resulted from uprooting her family from England to the Italian countryside for a winter" --Travel + Leisure, "Great Summer Reading"

"[Cusk]'s got guts . . . The traumatic juxtaposition of sublime paintings and tourist tat inspires Cusk to writing that will sit honourably in an anthology with Byron and Forster . . . Travel writing about Italy might be an oversubscribed genre, but The Last Supper more than earns its place at the table." --Celia Brayfield, The Times (London)

"What Cusk does not learn, and doesn't need to learn, is how to write. As always in her work, there is a scattering of archaisms ('commence, ' 'venture, ' 'outlay') that sometimes gives the prose an archness verging on the pretentious, but the intensity of her gaze can also give rise to descriptions of beauty and precision. Alert to nuance, she will catch the 'blanched severity' in a face, the sadness 'that you see in the eyes of people who were unhappy children, ' the self-consciousness of an American honeymooner with 'the faux-heroic look of a Kennedy.' And her descriptions of Italian food--pizza 'like a smiling face' that 'assuages the fear of complexity, ' dough 'as pliant and soothing' as a mother's breast--are pure joy." --Christina Patterson, New Statesman