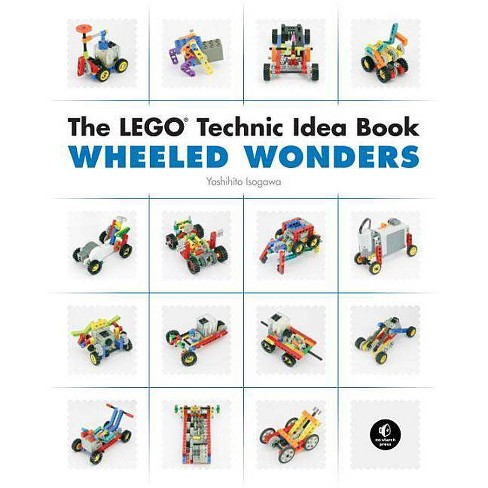 This volume on LEGO TECHNIC focuses on vehicles that can drive, turn, move things, and go backwards. The book's illustrations demonstrate various ways to build TECHNIC vehicles, which readers can use as starting points for their own creations.

The LEGO(R) Technic Idea Book: Wheeled Wonders is a collection of hundreds of mechanisms for cars, trucks, motorcycles, and other vehicles that you can build based on their pictures alone. Each project uses color-coded pieces and is photographed from multiple angles, making it easy to see how the models are assembled without the need for step-by-step instructions. Every model illustrates a different principle, concept, or mechanism that will inspire your own original creations. You're encouraged to use these elements as building blocks to create your own masterpieces. The Technic models in Wheeled Wonders spin or move things, drag race, haul heavy gear, bump off walls, wind up and go, and much more. You'll discover how to build differential gears, implement steering and suspension, and design clutch and transmission systems to use in your own vehicles. This visual guide, the second in the three-volume LEGO Technic Idea Book series, is the brainchild of master builder Yoshihito Isogawa of Tokyo, Japan. Each title is filled with photos of Isogawa's unique models, all of which are designed to fire the imaginations of LEGO builders young and old. Imagine. Create. Invent. Now, what will you build? NOTE: The LEGO Technic Idea Book series uses parts from various Technic sets. If you don't have some of the pieces shown in a particular model, experiment by substituting your own parts or visit the author's website for a list of the special parts used in the book.

Yoshihito Isogawa is a LEGO luminary with 42 years of building experience. He began writing computer manuals while at the Tokyo University of Science and founded Isogawa Studio, Inc. soon after. He has twice won the grand prize in the Japan Manual Contest held by the Japan Technical Communicators Association and he has won outstanding performance awards many times. He currently lives in Tokyo.
If the item details above aren’t accurate or complete, we want to know about it. Report incorrect product info.