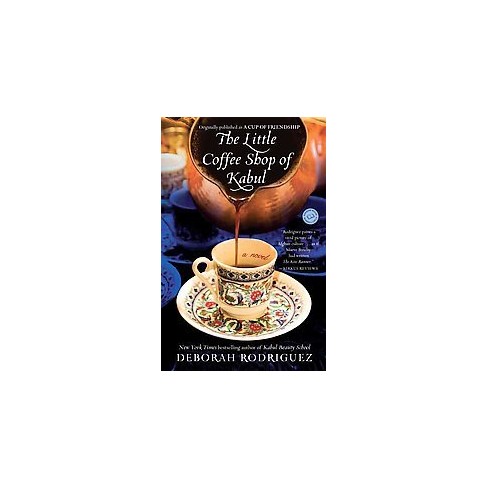 $13.39
undefined out of 5 stars with 0 reviews
be the first!be the first! ratings
Help us improve this page

" Deborah] Rodriguez paints a vivid picture of Afghan culture. . . . As if Maeve Binchy had written The Kite Runner."--Kirkus Reviews

After hard luck and heartbreak, Sunny finally finds a place to call home--in the middle of an Afghanistan war zone. There, the thirty-eight-year-old serves up her American hospitality to the expats who patronize her coffee shop, including a British journalist, a "danger pay" consultant, and a wealthy and well-connected woman. True to her name, Sunny also bonds with people whose language and landscape are unfamiliar to most Westerners, but whose hearts and souls are very much like our own: the maternal Halajan, who vividly recalls the days before the Taliban and now must hide a modern romance from her ultratraditional son; and Yazmina, a young Afghan villager with a secret that could put everyone's life in jeopardy. In this gorgeous first novel, New York Times bestselling author Deborah Rodriguez paints a stirring portrait of a faraway place where--even in the fog of political and social conflict--friendship, passion, and hope still exist. Originally published as A Cup of Friendship. Praise for The Little Coffee Shop of Kabul

"A superb debut novel . . . Deborah] Rodriguez captures place and people wholeheartedly, unveiling the faces of Afghanistan's women through a wealth of memorable characters who light up the page."--Publishers Weekly

" A] fast-paced winner of a novel . . . the work of a serious artist with great powers of description at her disposal."--The Kansas City Star "Readers will appreciate the in-depth, sensory descriptions of this oft-mentioned and faraway place that most have never seen."--Booklist

"Charming . . . a book] to warm your heart."--Good Housekeeping
If the item details above aren’t accurate or complete, we want to know about it. Report incorrect product info.