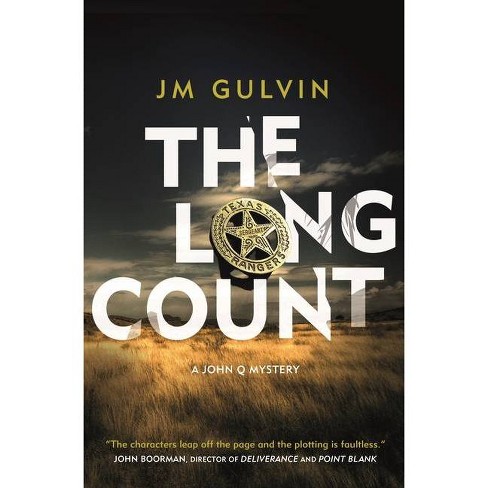 The detail is unerring ... and this magisterial grasp of time and place lends the story vivid veracity. The characters leap off the page and the plotting is faultless. -- John Boorman, Director of Point Blank and Deliverance
Gulvin's narrative has a distinctly cinematic feel, and his setting--the windswept plains and desolate highways of Texas--lends an eeriness that lingers throughout. The final twist is a doozy, and the devil is in the story's cleverly seeded details. -- Publisher's Weekly With a gun on each hip and godson to the Ranger that took down Bonnie and Clyde, 36-year-old John Quarrie is Old School West with old west values, the very embodiment of the One Riot - One Ranger epithet. It's 1967, and, with students across the state protesting the Vietnam War, the Texas Rangers are stretched pretty thin. A single father, Quarrie lives on a ranch in the Texas panhandle. Grabbling for catfish at the site of a train wreck on Memorial Day, he and his son come across the skull of a young boy. At first, the discovery seems to have no bearing on the suicide of a fellow war vet that John Q is called on to investigate. But what starts out as a single line of inquiry becomes a desperate race to find a killer who has a secret as dark and tragic as any cop is ever going to uncover.

"J. M. Gulvin is British, but his new book, the first in a series, is set in Texas in 1967, and the protagonist is a Texas Ranger named John Quarrie, mostly called John Q. The book opens with the discovery by John Q., his son, and a friend of a skeleton in a wrecked train submerged in a river. It moves quickly to the beating of a cop and the discovery of an apparent suicide. John Q. knows at once that it's not a suicide, and the dead man's son, Isaac, doesn't believe it is, either. The local cops, however, do. There are other deaths, and John Q., operating more like a p.i. than a Ranger, crisscrosses a lot of East Texas in his pursuit of answers. One place his investigation takes him is Trinity Hospital, where Isaac's twin brother, Ishmael, was confined. The hospital, which has burned, was an asylum for the criminally insane. After the fire, Ishamel goes missing. Developments like this give the novel a gothic air, and in fact the book, with its massive use of coincidence, seemed to me a kind of throwback to the pulp era of story telling. This is, by the way, a compliment. The Long Count is well-paced and a lot of fun, and I suspect that it and its sequels will find quite an appreciate audience." -- Bill Crider, crime fiction author of the Dan Rhodes series

At first blush, readers will think they're meeting another leathery cowboy hero. He's a Texas Ranger; his name is John Quarrie --he goes by John Q--and he taps his Camels on the base of his thumb and tells you that even if you have him covered, he can draw and kill you before you pull the trigger. 'It's something I study on, ' he says offhandedly. But a few pages in, we learn that John Q, like this novel, is different. He can glance at a supposed suicide and know it was murder because of the skin around the wound. He can study boot prints and tell you when that particular boot was adopted by the military. He's confronted by a crime spun out of the biblical story of Ishmael and Isaac and promptly books up on dissociative identity disorder. Gulvin tells the story in terse noir prose salted with odd but effective inversions --'almost absently he seemed to stare'--and takes his time approaching the startling revelations in the finale. A challenging but rewarding read. - Booklist

It's the start of a hot Texas summer in 1967. Ranger John Quarrie is asked to take the long drive over to Marion County, where local police need his help in solving the brutal beating of a cop. John Q's dispatcher interrupts the drive with a call to check on another "incident" not far out of the way. The incident looks like the suicide of a middle-aged military veteran, though John Q does not buy it. The dead man's young son, Isaac, returns home after three tours of duty in Vietnam intending to surprise his now suddenly dead father. John Q and Isaac set out to find the killer or killers.
Strange little discoveries pull John Q and readers forward. More dead bodies turn up. The hunt accelerates and grows both more complex and ominous. John Q sees connections in the killings. Suspicion falls on Isaac's twin brother, Ishmael, believed to have died in the fire of a local asylum for the insane but perhaps not.
Gulvin's portrayal of widower and single father John Q works well. The crime details and settings ring true. Lesser characters are intensely human and interesting. The main plot and several subplots challenge logic but come together in a rousing ending that will surprise some readers and cause others to shout, "I knew it!"'
-- The Historical Novel Society

Set in 1967, Gulvin's tightly plotted first mystery, a series launch, introduces Texas Ranger John Quarrie, a man of few words. During the investigation of a brutal beating of a cop, Quarrie visits the rural home of Ike Bowen. Bowen is dead, hunched over his desk, a gun in his hand. Judging by the powder burns on his face, Quarrie decides it's a homicide made to look like a suicide. Bowen's son Isaac, who just returned from Vietnam, insists that his father would never have killed him- self. Meanwhile, a killer is on the move, and the victims lead Quarrie to Trinity Hospital, an asylum for the criminally insane, which has just burned down. Isaac's twin brother, Ishmael, was committed there and is one of those missing after the fire. Ishmael's doctor is hiding something, and answers may lie in the remains of Trinity. Gulvin's narrative has a distinctly cinematic feel, and his setting--the windswept plains and desolate highways of Texas--lends an eeriness that lingers throughout. The final twist is a doozy, and the devil is in the story's cleverly seeded details. - Publisher's Weekly

The detail is unerring ... and this magisterial grasp of time and place lends the story vivid veracity. The characters leap off the page and the plotting is faultless.
-- John Boorman, Director of Point Blank and Deliverance

"Quarrie is a very likable protagonist, the single father of a ten-year-old son who also winds up playing a part in the plot. He's just flashy enough to be interesting and is also a smart, determined investigator. There's a good sense of time and place (although as someone who grew up in Texas during the Sixties, I don't think Gulvin quite nails it all the time) and plenty of good dialogue. Gulvin has a distinctive style that took me some getting used to, but he's also a top-notch storyteller who kept me turning the pages. THE LONG COUNT is the first of a new series that reminded me at times of Craig Johnson's Walt Longmire books. Well worth checking out." -- James Reasoner, crime fiction author of Texas Wind and Dust Devils

"The Long Count by JM Gulvin (Faber & Faber; Sept. 26): I like books set in the west and have an interest in the Texas Rangers, so this first in a new series featuring John Q, a 20th-century ranger caught my attention. The novel--part mystery, part thriller--is set in the late 1960s, during the height of the Vietnam War protests. I like the time period because John, a Korean War veteran and godson to the ranger who brought down Bonnie and Clyde, can't rely on modern-day technology. His car radio can be full of static, he has to look for pay phones, there's no GPS, and research is done via phone calls. Fortunately, our hero has been well trained, not only as a ranger but also as a tracker. He's also observant and can read crime scene clues like few others. John's territory is in northeastern Texas, along the Red River, and you get a good sense of the environment: open spaces, tiny towns, and law-enforcement departments with few resources. Gulvin provides good period details, and the dialogue is believable, making it easy to envision the characters. The Long Count isn't a perfect novel, though, and I have some questions about whether the ending holds up 100 percent. Still, I liked John Q and the people in his support circle and am looking forward to more entries in the series. If you like intense, twisty mystery/thrillers and/or novels set in the west, you'll enjoy The Long Count." - Beth Fish Reads

JM Gulvin divides his time between Wales and the western United States. He is the author of many previous novels, as well as Ewan McGregor and Charley Boorman's bestselling travel book Long Way Down. The Long Count is his first John Q mystery. He is married and has two daughters.
If the item details above aren’t accurate or complete, we want to know about it. Report incorrect product info.