The Magical Worlds of Harry Potter - by David Colbert (Paperback) 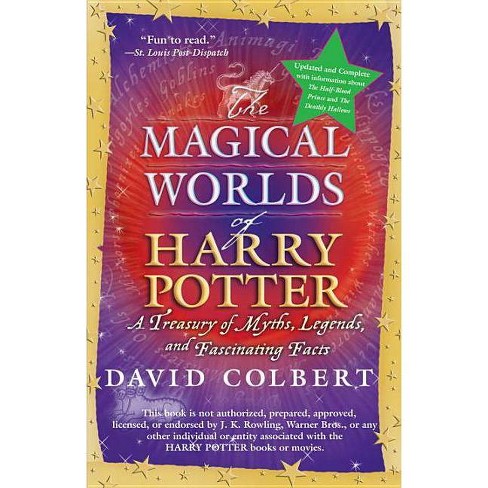 $12.29
MSRP$15.00
0 out of 5 stars with 0 reviews
be the first!be the first! ratings
Shipping
Free standard shipping with RedCard
Help us improve this page

Praise for The Magical Worlds of Harry Potter "Digs deep into different cultures and mythologies to piece together the origins of Rowling's characters. Learn about griffins, goblins, Latin, and why Harry is a universal hero."--The Baltimore Sun "Have you ever wondered where J.K. Rowling gets her ideas for fantastic beasts and magical critters? You can learn about them in The Magical Worlds of Harry Potter."--Detroit Free Press "A glorious tribute to Rowling's work."--The Times (London) "An affectionately written companion book intended to help visitors to Rowling's world navigate."--January Magazine "A feast for future game-show contestants...You could use it as reference to set up a round of Jeopardy!"--The Orlando Sentinel "A guide to the history, literature and mythology Rowling sprinkles throughout her four Harry Potter books. Grown-ups might like [it] too, because it painlessly exposes youngsters to Shakespeare, Chaucer, Ovid, Flaubert and more."--St. Louis Post-Dispatch "Potter fanatics...can revel in details and hidden mysteries of the series."--The Columbus Dispatch
If the item details above aren’t accurate or complete, we want to know about it. Report incorrect product info.