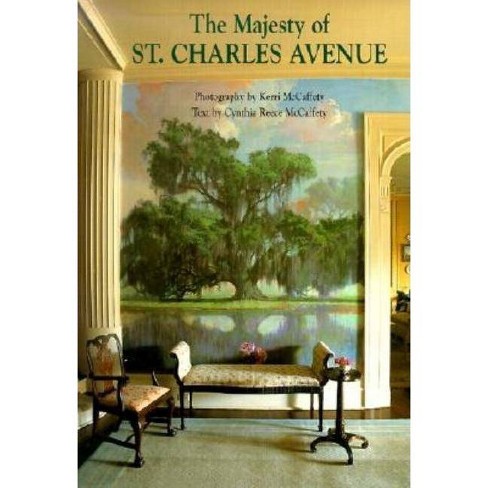 "Kerri McCaffety's work is lush with natural light that makes the images sensual and rich, and transforms the places she photographs into poems."
--Francis Ford Coppola

"Usually photographs don't quite capture the magic of the moment, but [Kerri McCaffety's] still images seem to transcend their subjects. . . .Versailles could use her talents . . . a photographic genius."
--Donald Mitchell, author and Amazon.com top ten reviewer

The jewel of America's great avenues, St. Charles Avenue is a five-mile journey through a century of architectural styles. Intricate Queen Anne houses, stately Italianate mansions, and Richardsonian castles rise among the oaks and palms. Through it all, the world's oldest working streetcar line runs like a silver ribbon connecting the eighteenth-century French colonial enclave at one end to fin de siï¿½1/2cle villas in the shadow of Audubon Park at the other.

John Mariani of Esquire calls Kerri McCaffety "one of the great photojournalists in America." She is the first-place winner of the 1999 Society of American Travel Writers Lowell Thomas Award for a self-illustrated article. The New Orleans Gulf South Booksellers Association named McCaffety's first book, Obituary Cocktail, Book of the Year for 1998. Her second book, The Majesty of the French Quarter, was called "a vision to behold" by Gambit literary reviewer Julia Kamysz Lane, and "easily one of the most handsome coffee table books in years" by the (Jackson, MS) Clarion-Ledger. Her writing and photojournalism appear in publications including The Oxford American, Town and Country, Historic Traveler, Colonial Homes, Southern Accents, Travel & Leisure, Metropolitan Home, and The Seattle Times.

Cynthia Reece McCaffety writes about a wide range of subjects. Her essays, humor, and general-interest features have appeared in The Houston Chronicle, Hemispheres, Women's Sports and Fitness, Horseplay, and the Arkansas Times. Anglo-American Spotlight in Munich, Germany, published her story about the Mardi Gras Indians of New Orleans, and the New York Times selected her history of time zones for worldwide syndication. A Texan by birth, she spent most of her life in Houston, but has called New Orleans her home-away-from-home since 1985. Her three children are all gifted writers and artists. This is her first collaborative project with her daughter, Kerri.