The Man Who Made Wall Street - by Dan Rottenberg (Paperback) 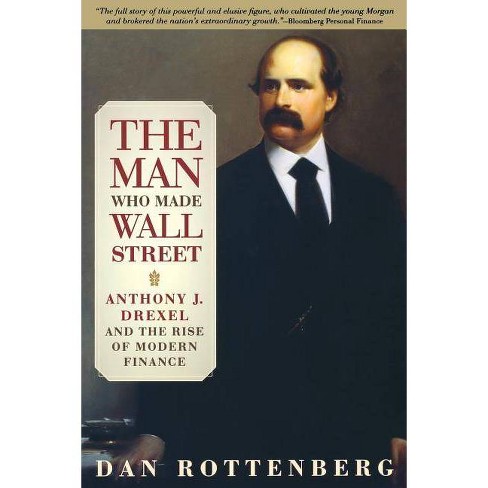 He tamed the market's bulls and bears. "He was the best friend I have ever had in every way."--J. P. Morgan

It was the height of the Gilded Age and J. Pierpont Morgan controlled the fate of railroads, corporations, and governments. The wealthy and influential were said to tremble before his blinding intellect and intimidating gaze, yet he deferred to one man: Anthony J. Drexel. Drexel--whose name is familiar today only through the university he founded and his recently canonized niece and protegee, Katharine--was the most influential financier of the nineteenth century.

The second son of an Austrian emigre, Anthony Drexel (1826-1893) soon established himself as the preeminent financial mind in the Philadelphia currency brokerage his father began in 1838. Shunning publicity, self-promotion, and high-profile public accolades (he declined President Ulysses S. Grant's invitation to become Secretary of the Treasury), Drexel initiated a partnership with J. P. Morgan and his father, Junius, that became the most powerful financial combination of its age.

At a time when the United States did not have a central bank, the government as well as large-scale commercial ventures relied on financiers to raise the enormous sums of money necessary to build railroads, construct factories, and fight major wars. With branches and partnerships in London, Paris, Chicago, and New York, all benefiting from their leader's reputation for impeccable integrity, Drexel's firms were able to steer American business through the most extraordinary long-term economic growth of any nation in world history, as well as through four devastating depressions, an enlightening lesson in the cyclical nature of the U.S. economy.

Drexel and his firm quietly pioneered many of the financial and business strategies that we now take for granted, such as trading national currencies, guaranteeing credit for travelers abroad, rewarding workers based on individual initiative, and offering "sweat equity" to deserving employees who could not afford to buy stock. By cultivating Morgan's self-confidence and allowing his younger business partner to become the public face for the firm, Drexel was able to avoid attention and, instead, nurture his extended family.

Today, Anthony J. Drexel's influence and accomplishments are mostly forgotten or credited to others, but after decades of detective work and careful research, Dan Rottenberg has succeeded in writing the first biography of this exceptionally influential and elusive man. Since Drexel gave no interviews, kept no diaries, held no public offices, and destroyed most of his personal papers, Rottenberg had painstakingly to track down every reference and anecdote he could find and, in the process, discovered 150 previously unknown letters and cables in Drexel's hand. Drexel believed that there is no limit to what one can accomplish if one doesn't mind who gets the credit, but as The Man Who Made Wall Street shows, the balance has finally been paid in full.