The Man with the Golden Flute - by James Galway (Hardcover) 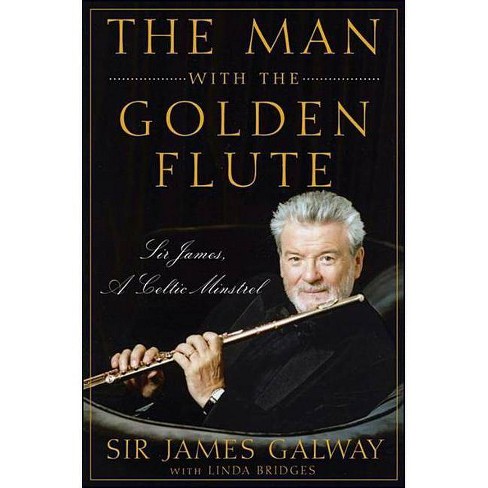 How did a young man with few resources rise from a poverty-stricken, working-class neighborhood, cheek by jowl with the Belfast shipyards, to become the most celebrated flute player and the most televised and recorded classical artist performing today? Practice? Of course. But as Sir James Galway reveals in this highly entertaining and moving autobiography, it took a great deal more than that.

In "The Man with the Golden Flute," Sir James looks back on a long life in the pursuit of music and the many people who helped him along the way, and tells the story of his great adventure from the very beginning. He reflects on the challenges he faced coming from one of the poorer sections of Belfast, becoming a leading orchestral musician, and then making the decision to go solo, as well as the milestones he reached as he made his way to the top of his profession. He shares delightful stories from his more than fifty-year career, during which he has traveled around the world many times and made countless friends, including legends in the music world, both classical and popular.

Sir James begins with reminiscences of his youth, when his parents, avid musicians both, encouraged and guided his development as a flute player and made great sacrifices to make sure he had the instruments and the training he needed. He also recalls fond memories of his first full-time professional position, his first recording session, and his awkward response to the stranger who accosted him on the street to offer him the position of first flute in the London Symphony Orchestra. He reveals how a dispute with the legendary Herbert von Karajan at the Berlin Philharmonic opened the door to his solo career; how he met and courted a young flute player named Jeanne Cinnante and has been touring with her ever since; and how he became known as "the man with the golden flute." He also recalls the terrible accident that very nearly cost him his life and, without question, changed it forever.

This stirring account is also a valuable resource for aspiring musicians. Sir James offers insights into what it takes to become an outstanding player and how to keep growing and developing as an artist long after your formal schooling is over. He also has plenty of tips on dealing with fellow musicians, orchestra managers, and fans.

Complete with charming, sometimes hilarious tales of Sir James's performances with collaborators ranging from Mstislav Rostropovich to Henry Mancini to the Empress of Japan, "The Man with the Golden Flute" is a must-read for Galway fans, music lovers, and anyone who is fascinated by the life and times of the world's most popular classical musician.