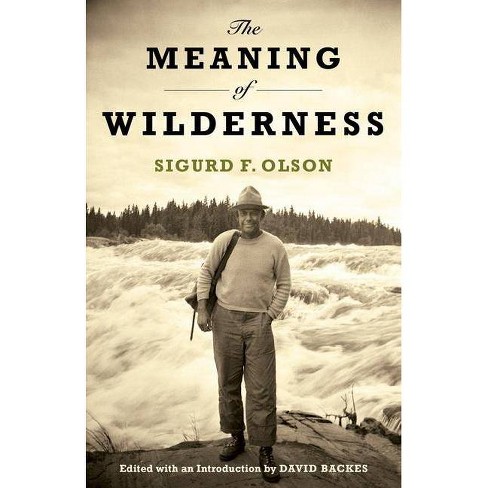 Sigurd F. Olson was one of the most important environmentalists of the twentieth century, and his wilderness writing has been beloved by generations of readers. In The Meaning of Wilderness, many of his magazine articles and speeches, written from 1928 to 1973, are gathered together and present the evolution of his thinking and experience of wilderness.

An introduction and commentary throughout the book by Olson's biographer, David Backes, give context to these essays and help readers understand how Olson's wilderness philosophy developed over time. A lively look at one of our country's most active naturalists, The Meaning of Wilderness is essential reading for Olson fans and outdoor people of all ages.

[INSIDE BACK FLAP: ]
Sigurd F. Olson (1899-1982) introduced generations of Americans to the importance of wilderness through his work as a conservation activist and popular writer. He served as president of the Wilderness Society and the National Parks Association and as a consultant to the federal government on wilderness preservation and ecological problems. He earned many honors, including the highest possible from the Sierra Club, the National Wildlife Federation, and the Izaak Walton League.

David Backes is the author of A Wilderness Within: The Life of Sigurd F. Olson (Minnesota, 1997), winner of the 1998 Small Press Book Award for biography. He is also the author of Canoe Country: An Embattled Wilderness and The Wilderness Companion (1992).

"Why wilderness? . . .
Ask those who have known it and who have made it a part of their lives. They might not be able to explain, but your very question will kindle a light in eyes that have reflected the camp fires of a continent, eyes that have known the glory of dawns and sunsets and nights under the stars. Wilderness to them is real and this they do know; when the pressure becomes more than they can stand, somewhere back of beyond, where roads and steel and towns are still forgotten, they will find release."
-Sigurd F. Olson, "Why Wilderness?" (1938)

Praise for A Wilderness Within: The Life of Sigurd F. Olson by David Backes:

"A highly readable portrait of a much-loved writer and a beautifully articulated history of the conservation movement in the United States through the middle decades of this past century." Audubon Magazine