The Memoirs of Louis Bouyer - (Hardcover) 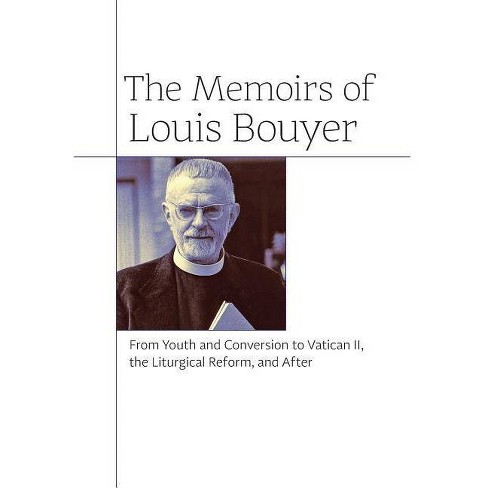 Louis Bouyer was a major figure in the Church of the last century. These memoirs, which Bouyer wrote in a humble and humorous vein--though without withholding his notoriously sharp pen when needed--allow the reader to enter with him into the great events that shook the Church and the world during the era of upheavals and transformations through which he lived. They amount to an intelligent, sensitive, and pious man's fascinating chronicle and deep reflection on Christianity's life and travails in a world committed to modernity. Bouyer here tells us the full and varied story of a life devoted to the discovery of the sources and Tradition of the Church in doctrine, spirituality, liturgy, and scripture.

We follow Bouyer's journeys from his inherited Protestantism to the fullness of the Catholic Faith, from his position as a Lutheran pastor to the priesthood in the Oratory of France, from humble parish life to the Olympian heights of his official theological and liturgical collaboration (and difficulties) before and after the Council with such influential figures as Congar, Daniï¿½lou, de Lubac, Bugnini, and... Joseph Ratzinger (Benedict XVI). Bouyer paints the lush landscape of a century's illusions and disenchantments; his memoirs are essential for understanding the history of the Church during that momentous time.

"It would be impossible for anyone to speak knowledgeably about liturgical developments in the past 50 years without being cognizant of the work done by Louis Bouyer. His Memoirs, which feature his outspoken opinions and profound intelligence as well as a personality deeply imbued with the true spirit of the Catholic liturgy, can serve as a balance and perhaps an antidote to misinformation about the post-Vatican II developments in the Sacred Liturgy of the Latin Rite. A careful perusal of these Memoirs, now available in English in an excellent translation by John Pepino, also can serve as a corrective to the sometimes unbridled and euphoric optimism that marked liturgical studies in the late 1960s and early 1970s. I cannot recommend strongly enough the reading and study of this work."--BISHOP (EMERITUS) FABIAN BRUSKEWITZ, Lincoln, NE

"While Father Louis Bouyer was a prolific author in many fields of theology, his most lasting legacy may well be his contribution to liturgical renewal, including his collaboration in the post-conciliar reform of the Roman rite. Bouyer is a sharp observer, and his retrospective is frank and at times caustic. Here is the authentic voice of a key witness to momentous developments in twentieth-century Catholicism. The publication of these important memoirs makes a real contribution to writing the history of the Church in our times."--FR. UWE MICHAEL LANG, Cong. Orat.; Heythrop College, University of London

"Louis Bouyer was, according to his former student Cardinal Lustiger "the least conformist and yet among the most traditional" of theologians--a reality borne out in these memoirs, which reveal Bouyer sinking ever-deeper roots in Catholic tradition as well as his ever-present ability to look at matters with a fresh, critical eye. Expertly translated and edited with additional notes for English readers, The Memoirs of Louis Bouyer not only provides important historical details hitherto unpublished--particularly regarding the liturgical movement and post-conciliar reform--but also offers a lesson in the nature of living Catholic Tradition: one that Bouyer would insist that we learn, and learn well."--DOM ALCUIN REID, Monastï¿½re Saint-Benoï¿½t, La Garde-Freinet, France