The Miracle of Castel Di Sangro - by Joe McGinniss (Paperback) 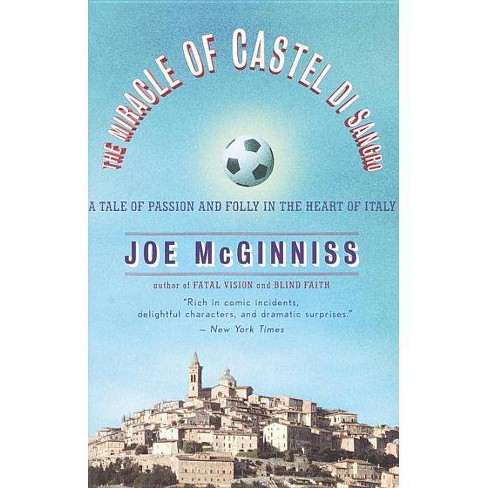 $12.29
MSRP$15.95
no reviews yet
be the first!be the first! ratings
Buy 2 get 1 free on video games, movies and books
Online only •
Shipping
Free standard shipping with RedCard
Loading, please wait...
Help us improve this page

Master storyteller Joe McGinniss travels to Italy to cover the unlikely success of a ragtag minor league soccer team -- and delivers a brilliant and utterly unforgettable story of life in an off-the-beaten-track Italian village.

When Joe McGinniss sets out for the remote Italian village of Castel di Sangro in the summer of 1996, he merely wants to spend a season with the village's soccer team, which only weeks before had, miraculously, reached the second-highest-ranking professional league in the land. But soon he finds himself embroiled with an absurd yet irresistible cast of characters, including the team's owner, described by the New York Times as "straight out of a Mario Puzo novel, smoking huge cigars and trailed by bodyguards", and coach Osvaldo Jaconi, whose only English word is the one he uses to describe himself: "bulldozer".

As the riotous, edge-of-your-seat season unfolds, so, too, does McGinniss's transformation into a true Italian soccer fan, complete with the irrational and blinding passions for which such fans are known. Moreover his fervor for soccer intertwines and grows with his love for the courageous team, their village and its people, and their country. As McGinniss travels with the miracle team on the season-long tour that takes him from the isolated mountain region where Castel di Sangro is located to such gritty towns as Foggia and Cosenza, as well as to obscure nooks of such grand cities as Genoa, Venice, and Verona, he introduces us to an Italy that no tourist guidebook has ever described. The Miracle of Castel di Sangro is a spellbinding, true story of an Italy to savor.