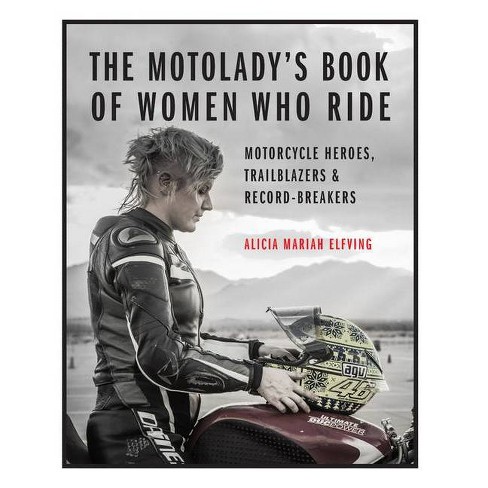 Alicia Mariah Elfving, founder of TheMotoLady.com and the Women's Motorcycle Show, dishes profiles of more than 70 women past and present who ride and wrench as well as anyone, and in the process have proven every bit as indispensable to maintaining and growing a positive motorcycling culture.

Written and curated by Alicia Mariah Elfving, founder of TheMotoLady.com and the Women's Motorcycle Show, and arguably the most notable advocate for women in the motorcycling hobby, The MotoLady's Book of Women Who Ride subverts all the tired women-and-motorcycle tropes, offering the true stories of the women past and present who ride and wrench as well as anyone, proving every bit as indispensable to maintaining and growing a positive motorcycling culture.

Historically, depictions of women in motorcycle culture tend to objectify--from the outlaw motorcycle club "biker babe" to cheesecake photography to posturing celebrities with motorcycles as props. The truth is much different. From the early days of motorcycle culture more than 100 years ago, women have played a central role in making the motorcycle a legitimate form of transportation, recreation, and motorsport.

Elfving presents more than 70 figures in the motorcycle world, from the Americas to Europe and even the Middle East and South Asia--stunt riders, racers, builders, customizers, organizers, and more. Elfving links today's women motorcyclists with those of the past and illustrates the freedom represented by two wheels, and how motorcycles allow women to transcend cultural expectations confidently. You'll meet riders such as:


Overwhelmingly positive, Elfving instills confidence and can-do rather than providing an echo chamber of common complaints among women in motorcycling. In addition, The MotoLady's Book of Women Who Ride is illustrated throughout with contemporary and historical photos of the author's subjects, comprising a beautiful as well as inspiring package.

Alicia Mariah Elfving is the founder of TheMotoLady.com, the world's leading websites for women who ride, as well as the world's first Women's Motorcycle Show. Those who appreciate women riders will find a massive amount of media here for daily distraction: motorcycles in art and design, motorcycle fashion and gear, and profiles of pioneering women motorcyclists are just some of the topics covered. Alicia also roams roadways far and wide looking for experiences and personalities to capture with her words and photographs. She splits her time between Portland, Oregon, and Los Angeles.


If the item details above aren’t accurate or complete, we want to know about it.

Preparing Your Heart for Marriage - by Gary Thomas (Hardcover)

Ride Out! - by Gestalten (Hardcover)