The Nature of Fragile Things - by Susan Meissner (Hardcover) 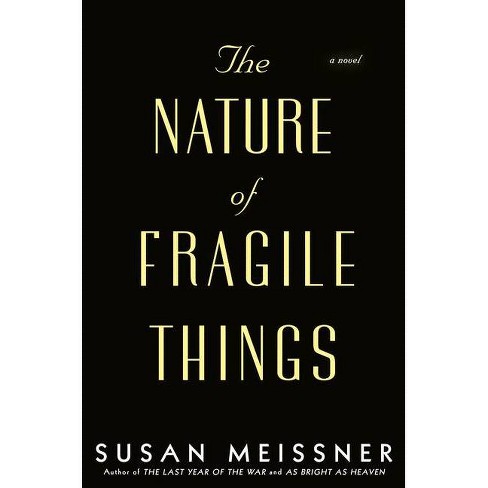 $26.00
new at target¬
0 out of 5 stars with 0 reviews
be the first!be the first! ratings
Help us improve this page

April 18, 1906: A massive earthquake rocks San Francisco just before daybreak, igniting a devouring inferno. Lives are lost, lives are shattered, but some rise from the ashes forever changed. Sophie Whalen is a young Irish immigrant so desperate to get out of a New York tenement that she answers a mail-order bride ad and agrees to marry a man she knows nothing about. San Francisco widower Martin Hocking proves to be as aloof as he is mesmerizingly handsome. Sophie quickly develops deep affection for Kat, Martin's silent five-year-old daughter, but Martin's odd behavior leaves her with the uneasy feeling that something about her newfound situation isn't right. Then one early-spring evening, a stranger at the door sets in motion a transforming chain of events. Sophie discovers hidden ties to two other women. The first, pretty and pregnant, is standing on her doorstep. The second is hundreds of miles away in the American Southwest, grieving the loss of everything she once loved. The fates of these three women intertwine on the eve of the devastating earthquake, thrusting them onto a perilous journey that will test their resiliency and resolve and, ultimately, their belief that love can overcome fear. From the acclaimed author of The Last Year of the War and As Bright as Heaven comes a gripping novel about the bonds of friendship and mother love, and the power of female solidarity.
If the item details above aren’t accurate or complete, we want to know about it. Report incorrect product info.