The New Book of Optical Illusions - by Georg Ruschemeyer (Paperback) 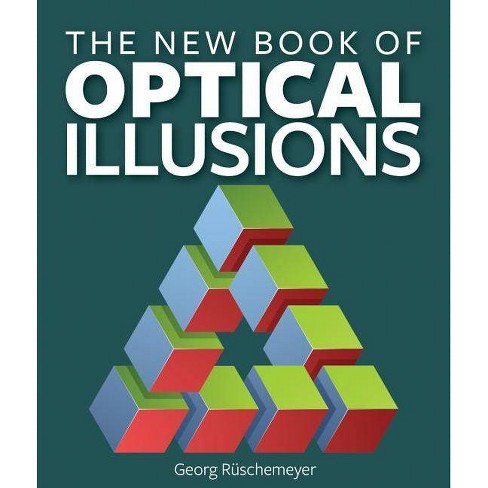 How 33 ancient, familiar and new optical illusions work, with 150 examples.

The New Book of Optical Illusions is a mind-bending collection of 150 of the most significant optical phenomena, loosely grouped into 33 chapters according to particular visual effect.

An optical illusion has two elements. One is the perceived illusion, what you see. It may be merging lines, moving shapes or conflicting sizes. The other element is the scientific explanation or neuronal basis of the illusion. Here enters The New Book of Optical Illusions, which describes the latter--the science of an optical illusion.

Concise text describes the history of the optical illusions and their origin. Some are ancient (like a 3D Roman mosaic in a 2nd-century BC home on Malta) and others are modern (like emoticons and street art). There are rarely seen phenomena, works by great illusionists, like M.C. Escher, and well-known illusions like the Impossible Triangle and the Albert Einstein/Marilyn Monroe portrait.

Some of the illusions are:

Perfect for young and adult readers and enthusiasts of optical illusions, this is a great selection for circulating collections and retail customers.

Too old for toys, too young for booze: What to get as a gift for those adolescent nieces and nephews? Ideally, it should be something that doesn't involve staring at a screen, so how about enticing them to stare at deceptive designs in a book instead? Whether it's jumping coins, disappearing letters, or a mural by the street artist Banksy, the challenges posed in this volume will likely prove irresistible to even the most jaded youth. Others in the family will want to have a turn with the book as well, which may make for an unusually quiet interval in the midst of holiday madness. Brief explanations accompany most of the illusions, building up to a fresh appreciation for our faculty of sight. Gift Guide 2015 Selection.-- (12/18/2015)

This is a wonderful book because it is not only large, containing 200 pages of illusions, that are very diverse but the author also gives you advice on just what you should be looking for and why. He explains the illusion... This, of course, goes to those who have been waiting for an excellent book on optical illusions... A must have for optical illusion fans.-- (11/03/2015)

Georg Ruschemeyer is a freelance journalist. He studied biology in Germany and at the University of Colorado. He is now working for leading German magazines, including GEO, Frankfurter Allgemeine, Zeitung, and others. He lives in England.