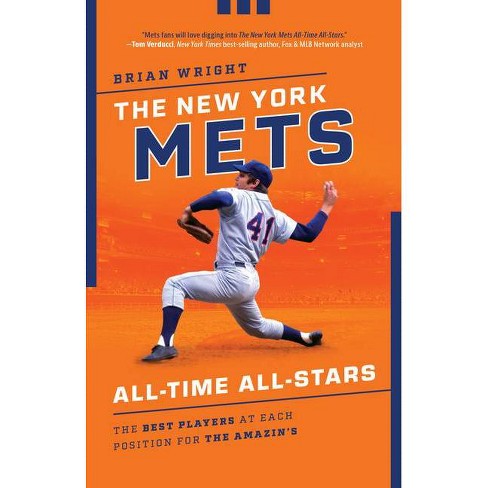 Let's say you're the manager of one of the most beloved franchises in Major League Baseball, with every past and current player available on your bench. Game time is approaching and the ump needs your line-up card. Who's your starting pitcher? Fireballer Dwight Gooden, lights-out Tom Seaver, or run-stingy Jacob de Grom? Is Gary Carter behind the plate or Mike Piazza? Who'll bat clean-up? Combining statistical analysis, common sense, and a host of intangibles, Brian Wright constructs an all-time All-Star Mets line-up for the ages. Agree with his choices or not, you'll learn all there is to know about the men who played for and managed New York's Amazin' Mets.

"Mets fans will love digging into New York Mets All-Time All-Stars. From the obvious picks to a few surprises, the book highlights the franchise's best in a breezy, easy-to-read style." --TOM VERDUCCI, New York Times Best-Selling Author, Fox & MLB Network Analyst "There's no debating Tom Seaver is the greatest Mets star of all time, but where do the other franchise luminaries rank? Brian Wright does a terrific and thorough job of making strong and compelling cases for the legends who have captured the hearts of Mets fans since 1962." --GARY APPLE, New York Mets pre- and post-game TV host, SNY "Brian definitely brought back memories of my days with the Mets and some of the characters I was privileged to play alongside. It was fun to read." --JON MATLACK, 1972 National League Rookie of the Year and three-time All-Star "I believe this book captures the details that will keep any Mets fan thoroughly entertained. I read it, and I definitely was. It is an honor to be included in this fine work." --HOWARD JOHNSON, 1986 World Series champion and two-time All-Star "Tom Seaver. Check. Mike Piazza. Check. Keith Hernandez. Check. The Mets marquee All-Stars are here, but Brian Wright digs deep to make his case for all the Mets--and any owner, front office executive, or manager--who made the cut. What better way to enjoy the greatest Mets milestones and moments than through the 'All-Time All Stars' who actually made them happen? Their stories are expertly brought to life in this fun journey through Mets history." --BOB HEUSSLER, WFAN "Like a pennant-winning manager of yore, Brian Wright knows which Mets he's going to take on his All-Star team and doesn't mind telling you why. His bold selection process would make Gil Hodges and Davey Johnson proud." --GREG PRINCE, author of Faith and Fear in Flushing "Brian is a knowledgeable historian who does his homework to make sure he gets it right. And as a Mets fan he knows New Yorkers will be right there to tell him their opinions." --MATTHEW SILVERMAN, author of 100 Things Mets Fans Should Know and Do Before They Die and Swinging '73

Brian Wright is the author of Mets in 10s: Best and Worst of an Amazin' History, released by The History Press in April 2018. He is also the managing editor of a new publication from the Society for American Baseball Research (SABR) entitled Met-rospectives, chronicling the greatest games in franchise history. Prior, he wrote for Bleacher Report, the Washington Examiner, NESN.com, SB Nation, and The Cauldron. For three years, Wright served as the lead MLB writer for The Sports Daily and from 2014 through 2017, hosted his own interview-based sports history podcast, "Profiles in Sports." He has also contributed to multiple SABR book projects, including the most memorable moments in the history of the San Diego Padres, Wrigley Field, and old Comiskey Park.
If the item details above aren’t accurate or complete, we want to know about it. Report incorrect product info.