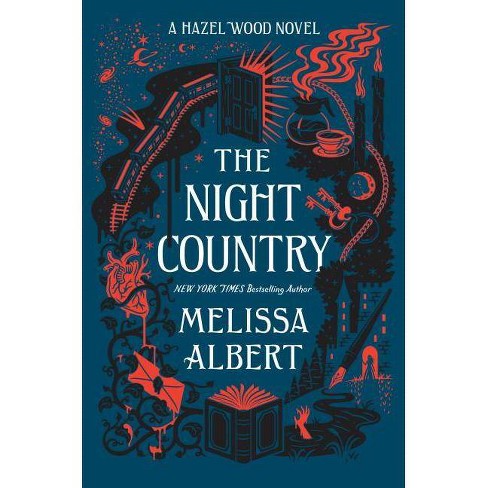 "Melissa Albert deftly weaves her magic once again between our world and the fairy tale realm of the Hinterland. The lush imagery, the sharp tone and tenor, will sweep you off your feet into a dreamworld you simply won't want to leave. The Night Country is a new modern classic for thrill seekers young and old. A stunning sequel filled with wondrous delights and daring forays into the dark. Not to be missed!" --Kim Liggett, author of The Grace Year

"The Night Country is so deliciously creepy--the kind of puzzle box nightmare you have to see through to the end. One of the most unputdownable books I've read in a long time." --Emily X.R. Pan, author of The Astonishing Color of After

"What Albert renders on the page is audacious: with resounding success, she keeps a firm grip on her characters and their stories, and her prose weaves a magic of its own, animating the ever-expanding fantastical premise through lyrical language, striking metaphor, and a mastery of tone that forces readers to feel the magic along with the underlying emotional stakes. It's a magnificent creation, laden with wonder and fear impossible to turn away from, that will satisfy fans and grow with readers over time. Literal goose bumps." --Booklist, starred review

"This follow-up to the astonishing The Hazel Wood displays the same lush prose, dizzying imagination, and macabre sensibilities (along with the grisly body count). A necessary read for Hinterland fans--and who isn't?" --Kirkus Reviews

Praise for The Hazel Wood

"The Hazel Wood starts out strange and gets stranger, in the best way possible. Albert seamlessly combines contemporary realism with fantasy, blurring the edges in a way that highlights that place where stories and real life convene, where magic contains truth, and the world as it appears is false, where just about anything can happen, particularly in the pages of a good book. It's a captivating debut." --The New York Times Book Review

"Insidiously beautiful, this is the opposite of escapist fantasy; it is a story about the imagination's power to loose atrocity into the (mostly) law-abiding confines of the real." --The Guardian

"A darkly brilliant story of literary obsession, fairy-tale malignancy, and the measures a mother will take to spare her child." --The Wall Street Journal, Best Children's Book of the Year

"An eerie, assured first novel. Albert occasionally entwines the haunting tales of the grandmother's book through this mesmerizing narrative, creating a fantasy as lush and twisty as ivy." --The Washington Post

"One of those rare young adult fantasy novels that holds a self-contained world in only a few hundred pages. If the novel's heroine is a teenage girl, then her story will appeal to readers of all ages, with its intrigue and strange fairy tale magic and very grown up writing." --Esquire

"A can't-miss, dark, and creepy new take on fairy tales that will have you glued to the page until the very end." --BuzzFeed

"This extremely creepy, wondrously original and beautifully written book conjures up a dark, bloody netherworld of fairytales and enchants and enthralls from the first sentence to the final page." --The Buffalo News

"A contemporary fantasy that dwells in an atmospheric, intertwining world of terrifying circumstances; a breathtaking dive into the magic and importance of story in one's identity. 'Story is the fabric of the Hinterland, ' one of the residents tells Alice. Another says, stories 'create the energy that makes this world go. They keep our stars in place.' If this is so, Albert's exquisite wordsmithing and story weaving have kept the stars aloft for a new generation of readers." --Shelf Awareness, starred review

"Alice's sharp-edged narration and Althea's terrifying fairy tales, interspersed throughout, build a tantalizing tale of secret histories and magic that carries costs and consequences. There is no happily-ever-after resolution except this: Alice's hard-won right to be in charge of her own story." --Publishers Weekly, starred review

"Highly literary, occasionally surreal, and grounded by Alice's clipped, matter-of-fact voice, The Hazel Wood is a dark story that readers will have trouble leaving behind. The buzz for this debut is deafening, and the fact that the film adaption is already in the works doesn't hurt." --ALA Booklist, starred review

"Simultaneously wondrous and horrific, dreamlike and bloody, lyrical and creepy, exquisitely haunting and casually, brutally cruel. Not everybody lives, and certainly not 'happily ever after'--but within all the grisly darkness, Alice's fierce integrity and hard-won self-knowledge shine unquenched." --Kirkus Reviews, starred review

"An empowering read that will be especially popular with fans of fairy-tale retellings." --School Library Journal, starred review

"Fans of the dark supernatural will gobble this up." --Bulletin of the Center for Children's Books, starred review

"Albert weaves a spellbinding, dark tale. The smoke-and-mirrors world of the Hazel Wood is deliciously creepy and its denizens are well-drawn." --VOYA, starred review

"It's no exaggeration to say that The Hazel Wood is one of the most anticipated books of the year. Fortunately this is one of those cases where the hype is justified. Readers, especially those with a fondness for dark fairy tales, won't want to miss this brilliant combination of realistic fiction and fantasy." --BookPage

"The Hazel Wood is a rich tapestry of dangerous delights, and it effortlessly balances charm, malice, beauty, and fear. The diverse characters, gritty twists and turns, vivid imagery, and captivating premise make this the perfect choice for fans of Lev Grossman, Lewis Carroll, and Edgar Allan Poe. Chilling, atmospheric, as fresh as it is dark: the must-read of the season!" --Romantic Times, RT Seal of Excellence

"The Hazel Wood is thoroughly, creepily captivating, with surprises I never saw coming! Such a refreshing and beautifully written inversion of the classic fairy tale-inspired story." --Kristin Cashore, author of Graceling

"This book will be your next literary obsession. Welcome to the Hazel Wood, where bad luck is a living thing, princesses are doomed, and every page contains a wondrously terrible adventure--it's not safe inside these pages, but once you enter, you may never want to leave. The Hazel Wood is pure imagination candy." --Stephanie Garber, author of Caraval

"Dark, spellbinding, and magical. One of the most original books I've read in years--The Hazel Wood is destined to be a classic." --Kami Garcia, author of Beautiful Creatures

"Reader, I warn you: this book beckoned me in with delicate claws then sank its teeth into my heart. I fear a part of me will never escape The Hazel Wood." --Heidi Heilig, author of The Girl from Everywhere

"Melissa Albert's The Hazel Wood is an elegant dark fairy tale, full of the power of story. It's creepy and gorgeous, and I loved every word." --Kat Howard, author of An Unkindness of Magicians

"Elegant, ethereal, and beautifully brutal, The Hazel Wood is a fairy tale worth falling for. This is a dream of a book I cannot recommend highly enough. It's like falling into a nautilus shell: every time you think you've found the end, another chamber opens. Absolutely breathtaking." --Seanan McGuire, author of Every Heart a Doorway

"Absolutely mesmerizing, magical, and inventive. Hats off to Melissa Albert!" --Karen McManus, author of One of Us Is Lying

"Dark, haunting, and absolutely mesmerizing: The Hazel Wood grabbed me with its mysterious, upside-down fairy tales, full of thorns and sharp twists. In no time at all, I became obsessed with this book, willing to follow it anywhere--even deep into the Hinterland." --Jodi Meadows, coauthor of My Lady Jane

"The Hazel Wood kept me up all night. I had every light burning and the covers pulled tight around me as I fell completely into the dark and beautiful world within its pages. Terrifying, magical, and surprisingly funny, it's one of the very best books I've read in years." --Jennifer Niven, author of All the Bright Places

"A winding, creepy, insidiously delicious novel. Utterly spectacular. I read it in one sitting!" --Melinda Salisbury, author of The Sin-Eater's Daughter

"Full of dark, twisty corners and eerie beauty, The Hazel Wood is like nothing else I've read before." --Evelyn Skye, author of The Crown's Game