The One Minute Closer - by James W Pickens (Paperback) 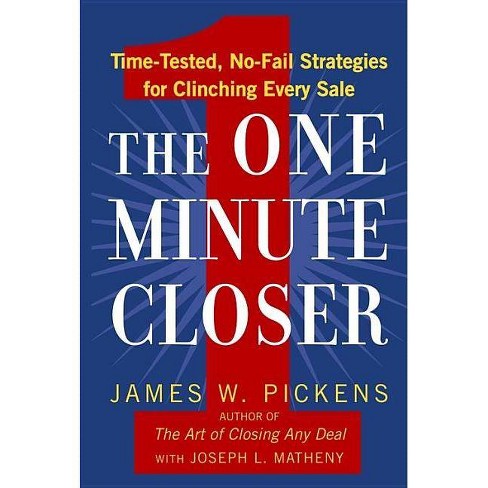 $11.99
no reviews yet
be the first!be the first! ratings
Shipping
Free standard shipping with RedCard
Loading, please wait...
Help us improve this page

James W. Pickens is one of the most dynamic and respected sales educators in the world. He is the author of The Closers, The Art of Closing Any Deal, More Art of Closing Any Deal, Cleopatra's Secrets of Negotiation and Persuasion for Women, Master Leaders (The Art of Influence) and The One Minute Closer, which is a best seller not only in the US but in China. Combined, his books have sold over twenty million copies worldwide, in fifty-four countries and twenty languages. Pickens has been featured in Publisher's Weekly, The Economist, The Wall Street Journal and Success Magazine, among many other publications. Some of his clients include: IBM, Dell, Sheraton, Disney, Hilton, Ford, Honda, GM, Toyota, Remax, Century 21, Coldwell Banker, and Prudential. Pickens has given sales seminars all over the world (he is a member of the National Speakers Bureau) and his books have been translated into 24 languages and sold in 57 countries. Joseph L. Matheny is a nationally known and respected media personality, who specializes in teaching sales "closing" methods and techniques to professional sales people. Matheny has personally trained some of the top master closers in the world, and his 35-year success record and achievements have been heralded and recorded in countless business publications.
If the item details above aren’t accurate or complete, we want to know about it. Report incorrect product info.