The Orphan Band of Springdale - by Anne Nesbet (Hardcover) 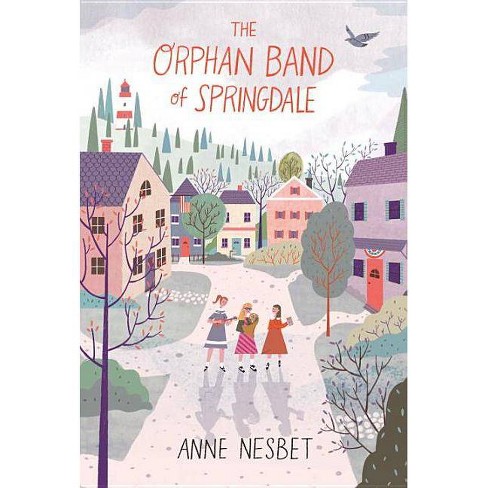 With the United States on the verge of World War II, 11-year-old Gusta is sent from New York City to Maine, where she discovers small-town prejudices--and a huge family secret.

With the United States on the verge of World War II, eleven-year-old Gusta is sent from New York City to Maine, where she discovers small-town prejudices -- and a huge family secret. It's 1941, and tensions are rising in the United States as the Second World War rages in Europe. Eleven-year-old Gusta's life, like the world around her, is about to change. Her father, a foreign-born labor organizer, has had to flee the country, and Gusta has been sent to live in an orphanage run by her grandmother. Nearsighted, snaggletoothed Gusta arrives in Springdale, Maine, lugging her one precious possession: a beloved old French horn, her sole memento of her father. But in a family that's long on troubles and short on money, how can a girl hang on to something so valuable and yet so useless when Gusta's mill-worker uncle needs surgery to fix his mangled hand, with no union to help him pay? Inspired by her mother's fanciful stories, Gusta secretly hopes to find the coin-like "Wish" that her sea-captain grandfather supposedly left hidden somewhere. Meanwhile, even as Gusta gets to know the rambunctious orphans at the home, she feels like an outsider at her new school -- and finds herself facing patriotism turned to prejudice, alien registration drives, and a family secret likely to turn the small town upside down.

In this uplifting, multifaceted historical novel set in 1941, Nesbet (Cloud and Wallfish) creates an arrestingly strong and sympathetic character in nearsighted 11-year-old Augusta "Gusta" Hoopes Neubronner...Nesbet deftly weaves disparate elements--music, orphans, labor unions, carrier pigeons, and a magic wish--into a richly developed story set during a pivotal era in American history.
--Publishers Weekly (starred review) The narrative style is deeply satisfying: unexpected flourishes of drollery grace the text; the theme of Gusta's new spectacles-enhanced vision gracefully serves as plot point and metaphor; and an ex- amination of folkloric Wishes respects both believers and doubters. Sometimes kids just need a book to cozy up with in an overstuffed chair, a secluded treehouse, or a nest of pillows. This is exactly that book.
--Bulletin of the Center for Children's Books (starred review) The dialogue is catchy, and Gusta's internal monologues share her tremendous curiosity and friendliness with readers. This is a good pairing for Kimberly Brubaker Bradley's The War that Saved My Life, both for the time period and its sense of pathos...Solid historical fiction with a memorable heroine.
--School Library Journal She's believably caught between her desire to do what's right, fighting back against growing prejudice against foreigners and unfair treatment of workers, and her need for comfort and security in an alien, sometimes-threatening new environment...this effort nicely captures the myriad faces of prejudice. Sometimes suspenseful and always engaging, this snapshot of determined Gusta and life before the war is sure to captivate readers.
--Kirkus Reviews Nesbet's narrative has a lilting quality that makes her storytelling both unique and attractive, and young readers will appreciate her well-rounded characters as well as a small but highly engaging group of antagonists. Nesbet also incorporates factual information of the era to highlight relevant themes of injustice, immigration and the labor movement. The Orphan Band of Springdale is a heartwarming and educational read.
--BookPage Intelligent, empathetic, and brave up to a point, Gusta is the most complex of the many well-drawn characters whose stories intersect, sometimes in surprising ways. A rewarding historical novel.
--Booklist Nesbet's prose brims with delights...A fine read-aloud. Grade: A
--The Plain Dealer

Anne Nesbet is the author of Cloud and Wallfish, among several other novels for young readers. A professor at the University of California, Berkeley, she lives in the San Francisco Bay Area.
If the item details above aren’t accurate or complete, we want to know about it. Report incorrect product info.