The Other Madisons - by Bettye Kearse (Hardcover) 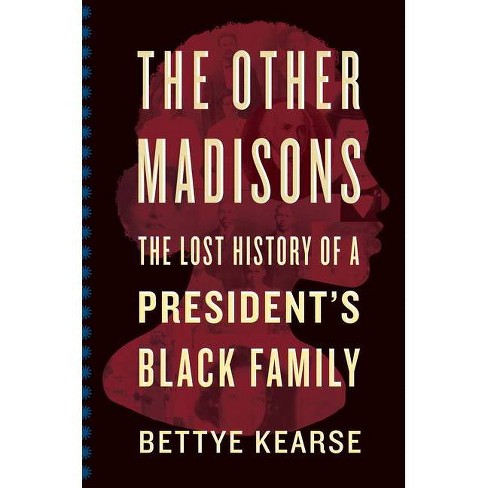 In The Other Madisons, Bettye Kearse--a descendant of an enslaved cook and, according to oral tradition, President James Madison--shares her family story and explores the issues of legacy, race, and the powerful consequences of telling the whole truth.

"A Roots for a new generation, rich in storytelling and steeped in history."
--Kirkus Reviews, Starred Review "A compelling saga that gives a voice to those that history tried to erase...Poignant and eye-opening, this is a must-read."
--Booklist In The Other Madisons, Bettye Kearse--a descendant of an enslaved cook and, according to oral tradition, President James Madison--shares her family story and explores the issues of legacy, race, and the powerful consequences of telling the whole truth. For thousands of years, West African griots (men) and griottes (women) have recited the stories of their people. Without this tradition Bettye Kearse would not have known that she is a descendant of President James Madison and his slave, and half-sister, Coreen. In 1990, Bettye became the eighth-generation griotte for her family. Their credo--"Always remember--you're a Madison. You come from African slaves and a president"--was intended to be a source of pride, but for her, it echoed with abuses of slavery, including rape and incest. Confronting those abuses, Bettye embarked on a journey of discovery--of her ancestors, the nation, and herself. She learned that wherever African slaves walked, recorded history silenced their voices and buried their footsteps: beside a slave-holding fortress in Ghana; below a federal building in New York City; and under a brick walkway at James Madison's Virginia plantation. When Bettye tried to confirm the information her ancestors had passed down, she encountered obstacles at every turn. Part personal quest, part testimony, part historical correction, The Other Madisons is the saga of an extraordinary American family told by a griotte in search of the whole story.

Winner of the International Afro American Historical and Genealogical Society Book Award
Winner of the Outstanding Book Award from the National Association of Black Journalists
One of Kirkus Reviews' Best Books of the Year
One of Smithsonian Magazine's "Best History Books of 2020"
One of Good Morning America's "7 Books to Read for Presidents Day," by Alexis Coe
One of Parade's Best Memoirs to Read this Year "ARoots for a new generation, rich in storytelling and steeped in history."
--Kirkus Reviews, Starred Review "Astonishing... In extraordinary times, as statues fall, Bettye Kearse has written an extraordinary book. It contains lessons for all Americans... Powerful...Seeking to validate and enlarge the black Madisons' saga, to tell a nuanced story until now completely unknown, [Kearse] succeeds richly...Leaving her much-celebrated white ancestors in the background, she restores the black Madisons to history. They are resilient Americans, second to none."
--Michael Henry Adams, The Guardian "[An] evocative and probing debut...[Kearse] succeeds in portraying her family's tenacious rise in social standing across eight generations. This moving account asks essential questions about how American history gets told."
--Publishers Weekly "'You come from African slaves and a president, ' Bettye Kearse's mother told her. According to oral history, she was the great-great-great-granddaughter of James Madison and Coreen, an enslaved woman; they were half-siblings. Armed with her family's archives, Kearse visited Montpelier, where Madison lived in a mansion and Coreen was likely born and raised in nearby slave quarters, and travels across the world and back again, through the Jim Crow South up to present-day California, in search of eight generations of Black Madisons. We think. A descendent of James Madison's brother, the only living relative of the author of the Bill of Rights, refuses to submit to a DNA test. This standoff is not unprecedented in presidential history, from Thomas Jefferson and Sally Hemings to William Harding and Nan Britton, but sooner or later, whether through ancestry.com or a more amenable descendent, the truth eventually comes out."
--Alexis Coe, for Good Morning America, "7 Books to Read for Presidents Day" "A compelling saga that gives a voice to those that history tried to erase...Poignant and eye-opening, this is a must-read."
--Booklist "A richly detailed, nuanced, and poignant story--part memoir and part social history--that places the dual legacy of slavery and sexual violence at the center of America's founding."
--The Progressive "A compelling saga... Kearse, a very worthy storyteller carries the reader along as she deliberately and forcefully expounds on a narrative, abundant in its details -- even though basically oral... In a way, Kearse's quest to fill out portions of her story resembles the quest of two generations ago by author Alex Haley in his journey to find Roots: A Saga of an American Family... In all, Kearse spent 'more than 20 years traveling, researching and writing' about her ancestors. Get this book and relive her journey."
--Daily Press "The Other Madisons marks the culmination of Kearse's 30-year investigation into not only her own family history, but that of other enslaved and free African Americans whose voices have been silenced over the centuries."
--Smithsonian Magazine, "Five New Nonfiction Books to Read While You're Stuck at Home" "A beautiful, sometimes wrenching, meditation on the brutality at the center of American history and the gnarled, complex power dynamics it has spawned in every facet of American life, from the halls of power to individual households."


"With The Other Madisons, Kearse adds unvarnished truth to her family's official history, as well as America's...Kearse's research is thorough, and the oral history of her ancestors admirably unbroken over the centuries...For a book that discusses the atrocities of owning people and the intergenerational trauma it causes, The Other Madisons is surprisingly charming and easy to read. Kearse, a retired physician who lives in Santa Fe, has a warm, teacher-y way of imparting information, even as she writes about man's inhumanity to man. Perhaps these qualities are part of her role as her family's designated griotte, or storyteller, a tradition that comes from West Africa...Now, in the era of Black Lives Matter and #MeToo, she has chosen to grapple with the past using a modern sensibility, even as her prose retains a proper, formal quality of which her mother would likely approve."

"Kearse's enlightening book, The Other Madisons, has not only been a labor of love for the author for 30 years but, more deeply, her life's purpose...Kearse's experiences with racism and those of her ancestors are deftly and sympathetically braided throughout the pages. Most notable is Mandy, who eloquently speaks to the reader through the author's imagination. Kearse came to understand that her ancestors must have possessed incredible inner strength and hope."
--Albuquerque Journal "The Other Madisons, as a thorough history of one family, may offer answers for other descendants of enslaved people as well. It is part personal quest, as Kearse works to understand and reconcile her own origins, and a carefully researched and documented correction to the American historical record." --Shelf Awareness "Though Kearse's attempts to establish a genetic link to the president -- who had no 'acknowledged offspring' -- are met with 'roadblocks, ' she succeeds in portraying her family's tenacious rise in social standing across eight generations. This moving account asks essential questions about how American history gets told."
--New York State Writers Institute (University at Albany, State University of New York) "A fascinating root-seeking odyssey. In this poignant search for a lost tie to a founding father, Kearse reckons with the equivocal link between DNA and family and illuminates the work of racial repair confronting us all."
--Alondra Nelson, author of The Social Life of DNA: Race, Reparations, and Reconciliation after the Genome "Bettye Kearse's searing eye for truth educated, awakened, and stunned me. The heroics and pain of the author's kindred--descendants of slaves and a president--illustrates a family and country built on the shoulders of slavery. An unbroken line of ancestral oral history combined with Kearse's research illuminates ten generations, from slavery to the present, in a continuing-battle against racism in which all Americans should fight. Kearse's generosity in presenting her hard-won truth is a gift I'll always remember with gratitude. I loved this page-turning book."
--Randy Susan Meyers, author of Waisted and The Widow of Wall Street "The Other Madisons is a tale that Bettye Kearse was literally born to tell. Family lore held that she was the descendant of James Madison and his slave, Corinne. How could she verify a history that existed outside of the historical record? As she journeys in search of her deepest, most painful family roots, Kearse unfurls an intensely personal tale that is also a quintessentially American story. Confronting colonialism and cruelty, power and its abuse, the silencing of slaves and the fraught complexity of intertwined nations and individual lives, The Other Madisons crafts a new kind of record, one that illuminates the power of a woman taking charge of her own truth."
--Paula Lee, PhD, historian and novelist "Inheriting the role of griotte--family storyteller--from her mother, Bettye Kearse set out to preserve and deepen the knowledge about her family that oral tradition traces back to President Madison and an African slave named Mandy. As she travels to Virginia, Portugal, and Ghana, she shares with readers her research, her reflections, and her poignant emotional responses to her family's past. Her quest, at once personal and historical, is both engrossing and very moving."
--Gail Pool, author of Lost Among the Baining: Adventure, Marriage, and Other Fieldwork

BETTYE KEARSE is a writer and retired pediatrician. Her writing has appeared in the New York Times Magazine, the Boston Herald, TIME Magazine, River Teeth, Zora, and the anthology Black Lives Have Always Mattered, among other places. The Other Madisons received the International Afro-American Historical and Genealogical Book Award for Nonfiction, Autobiography. Her research for The Other Madisons was covered in the Washington Post. She lives in New Mexico.
If the item details above aren’t accurate or complete, we want to know about it. Report incorrect product info.