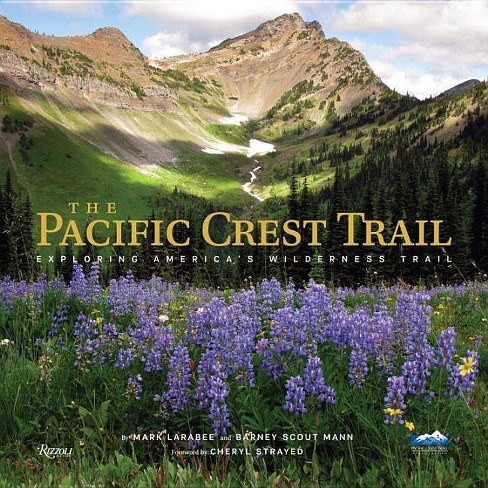 $33.99
MSRP$50.00
no reviews yet
be the first!be the first! ratings
Shipping
Free standard shipping with RedCard
Help us improve this page

"Makes me want to grab my pack--and pick up this new book!"
-- Nicholas Kristof, New York Times columnist and bestselling author. "The most inspiring, gorgeous and hiking-shoe-tugging book."
-- Angala Ballard, author of A Blistered Kind of Love, Barbara Savage Award Winner "Best Travel Books of 2016. All you ever wanted to know about this famed 2,650-mile route from Mexico to Canada is tucked inside this official trail book, published in conjunction with the Pacific Crest Trail Association. Learn about the trail's history through archival photos and documents, and draw out your own route on the included trail map. Fans of Cheryl Strayed's 2012 memoir and #1 New York Times Bestseller, Wild, can delve deeper into that author's experience, too--Strayed herself wrote the foreword."
-- Smithsonian Magazine "BEST COFFEE TABLE BOOK OF 2016. The only book published with the Pacific Crest Trail Association (which gets a cut of the proceeds), this tome features more than 300 pages of stories, maps, and, of course, photographs. It weighs more than your pack's base weight, but should you ever set down some roots, it'd look pretty classy on your coffee table."
-- Backpacker Magazine "The Pacific Crest Trail's history and imaginative power jump from the pages of this new coffee-table book. ... Larabee and Mann's book, The Pacific Crest Trail: Exploring America's Wilderness Trail will make you want to get out there. It's not just the prose, which is appropriately awe-stricken. It's not just the history, which is surprisingly fascinating. It's the photos. Filling up many of the book's 10"-by-10" pages, they capture the monumentality of the six national parks and 48 congressionally-designated wilderness areas through which the trail winds in California, Oregon and Washington state. Any nature enthusiast will enjoy the story. And also will be forgiven for skipping it and going straight for the photos."
-- The Oregonian "This gloriously lush and finely written by Mark Larabee and Barney Scout Mann book heads west and looks at the trail made even more famous by Cheryl Strayed in Wild (she contributes the foreword to this book). The only illustrated book officially published with the Pacific Crest Trail Association (PCTA), THE PACIFIC CREST TRAIL explores this legendary footpath with more than 250 spectacular contemporary images, unpublished historical photos and documents from the PCTA archives, and even the official trail map folded into an inside pocket. This inspired book truly makes you want to get up and out to explore the 48 wilderness areas and six national parks along this majestic trail with half of its 2,650 miles running through congressionally-designated dramatic wilderness."
--Travel by Entree "The Pacific Crest Trail is wily, beautiful and demanding--Now, at long last, the PCT gets the comprehensive biography it deserves. The Pacific Crest Trail: Exploring America's Wilderness Trail is the painstakingly researched and thoughtful written history of the trail, of the men and women who dreamed it up, expanded it, and continue to fight for it. The book even shines a light on the mysterious Clinton C. Clarke, the elusive PCT visionary. But make no mistake the beautiful photographs are not workplace-friendly; the full-color portraits of arroyos, hidden lakes and mountain crags, will tempt you to quit your job, sell off all your belongings and move to the Pacific Crest Trail."
--Dan White, author of Cactus Eaters: How I lost my Mind-and Almost Found Myself-On the Pacific Crest Trail
If the item details above aren’t accurate or complete, we want to know about it. Report incorrect product info.