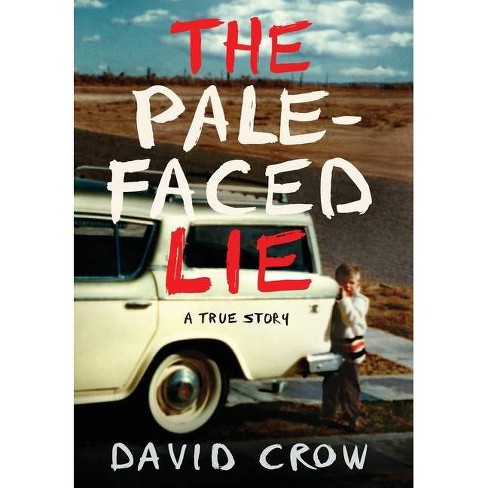 The Pale-Faced Lie is a searing, raw, palpable memoir that reminds us what an important role our parents play in our lives. Most of all, it's an inspirational story about the power of forgiveness and the ability of the human spirit to rise above adversity, no matter the cost.

Growing up on the Navajo Indian Reservation, David Crow and his siblings idolized their dad, a self-taught Cherokee who loved to tell his children about his World War II feats. But as time passed, David discovered the other side of Thurston Crow, the ex-con with his own code of ethics that justified cruelty, violence, lies--even murder. Intimidating David with beatings, Thurston coerced his son into doing his criminal bidding. David's mom, too mentally ill to care for her children, couldn't protect him.

Through sheer determination, and with the help of a few angels along the way, David managed to get into college and achieve professional success. When he finally found the courage to refuse his father's criminal demands, he unwittingly triggered a plot of revenge that would force him into a deadly showdown with Thurston Crow. David would have only twenty-four hours to outsmart his father--the brilliant, psychotic man who bragged that the three years he spent in the notorious San Quentin State Prison had been the easiest time of his life.

Raw and palpable, The Pale-Faced Lie is an inspirational story about the power of forgiveness and the strength of the human spirit.

"This painful memoir . . . delivers a truthful and ultimately empowering missive about the long shadow cast by an abusive parent."--Publishers Weekly

"For fans of Tara Westover's Educated, The Pale-Faced Lie: A True Story is a disturbing yet captivating memoir of how one man's psychopathic delusions can imprison an entire family . . . an empowering memoir."--New York Journal of Books

"A hard-hitting, gut-punch memoir that should be on any reading list about family relationships and abuse, true crime, and Native American culture and interrelationships."--Midwest Book Review

"The Pale-Faced Lie by David Crow is one of the most enlightening and entertaining true stories I have ever read. . . . Every page brings new action and excitement, delivered with easy dialogue and sincerity. If you're looking for an absorbing and touching read, grab The Pale-Faced Lie today." 5 STARS--Readers' Favorite

"It's hard to imagine a worse childhood than author David Crow and his siblings experienced. But his compelling and heart-wrenching memoir rises above the horror as a powerful testimony to the enduring strength of the human spirit. Crow's skill as a writer and his amazing lack of self-pity make this true story even more engaging."--Anne Hillerman, New York Times best-selling author

"﻿A hard and brilliantly insightful look into dealing with the hand we're dealt and improving it."--Joe R. Lansdale, award-winning author of over 40 novels, including Paradise Sky and Cold in July

"[Crow] has considerable wisdom to impart, and an unexpected ending that will linger in memory. I promise that you've never read a book quite like this one."--Jeff Guinn, New York Times best-selling author

"Heartbreaking and gut-wrenchingly honest. Anyone with a troubled childhood should read The Pale-Faced Lie. David Crow's book is proof that hope rises from the ashes."--Chris Enss, New York Times best-selling author

"A memoir of an extraordinary life that is lifted by extraordinary storytelling. . . . emotionally engaging, consistently entertaining, and nearly impossible to put down."--James Anderson, author of The Never-Open Desert Diner and Lullaby Road

"The Pale-Faced Lie is as gripping as some of the best-selling fiction books ever written. David Crow's amazing true story is hard to read, but even harder to put down. I missed one of my own deadlines because I didn't want to stop reading!"--Sherry Monahan, award-winning author of The Golden Elixir of the West; Tinsel, Tumbleweeds, and Star-Spangled Celebrations

"A riveting account of a world turned upside down. A very visual, engaging, and well-written book that will make the reader cringe, cry, and cheer for a boy on a treacherous journey to adulthood. Couldn't put it down."--Felix F. Giordano, best-selling author of the Jim Buchanan novels