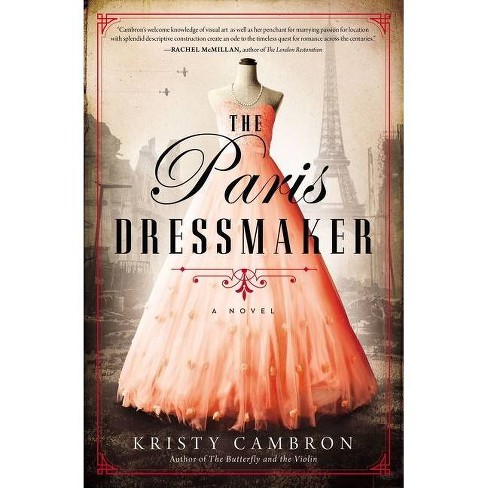 Based on true accounts of how Parisiennes resisted the Nazi occupation---from fashion houses to the city streets---The Paris Dressmaker weaves a story of two courageous women who risked everything to fight an evil they couldn't abide.

Based on true accounts of how Parisiennes resisted the Nazi occupation in World War II--from fashion houses to the city streets--comes a story of two courageous women who risked everything to fight an evil they could not abide.

Paris, 1939. Maison Chanel has closed, thrusting haute couture dressmaker Lila de Laurent out of the world of high fashion as Nazi soldiers invade the streets and the City of Light slips into darkness. Lila's life is now a series of rations, brutal restrictions, and carefully controlled propaganda while Paris is cut off from the rest of the world. Yet in hidden corners of the city, the faithful pledge to resist. Lila is drawn to La Resistance and is soon using her skills as a dressmaker to infiltrate the Nazi elite. She takes their measurements and designs masterpieces, all while collecting secrets in the glamorous Hotel Ritz--the heart of the Nazis' Parisian headquarters.?But when dashing René Touliard suddenly reenters her world, Lila finds her heart tangled between determination to help save his Jewish family and to bolster the fight for liberation.

Paris, 1943. Sandrine Paquet's job is to catalog the priceless works of art bound for the Führer's Berlin, masterpieces stolen from prominent Jewish families. But behind closed doors, she secretly forages for information from the underground resistance. Beneath her compliant facade lies a woman bent on uncovering the fate of her missing husband . . . but at what cost? As Hitler's regime crumbles, Sandrine is drawn in deeper when she uncrates an exquisite blush Chanel gown concealing a cryptic message that may reveal the fate of a dressmaker who vanished from within the fashion elite.

Told across the span of the Nazi occupation, The Paris Dressmaker highlights the brave women who used everything in their power to resist darkness and restore light to their world.

'Stunning. With as much skill and care as the title's namesake possesses, The Paris Dressmaker weaves together the stories of two heroines who boldly defy the darkness that descends on the City of Light.'--Jocelyn Green, Christy Award-winning author of Shadows of the White City

'Unimaginable heartache, unforgettable romance, and cheering defiance against the oppression the Nazis inflicted on Paris; readers will be swept away into a story where battle-scarred good at last rings victory over evil.'--J'nell Ciesielski, author of The Socialite

'With real life historical details woven in with her fictional tale, the story popped off the page. Readers will be thinking of this book long after they've read the last word.'--Rachel Hauck, New York Times bestselling author

'Woven within this beautiful historical tapestry of WWII from Cambron (The Painted Castle) is the stark reminder to keep friends close and enemies closer . . . Based on true events, this exquisite tale impresses with its historical and emotional authenticity. Historical fiction fans won't want to miss this.'--Publishers Weekly Starred Review
If the item details above aren’t accurate or complete, we want to know about it.

The Librarian of Saint-Malo - by Mario Escobar

Next Year in Havana - by Chanel Cleeton (Paperback)

The Book of Lost Friends - by Lisa Wingate (Hardcover)

The Prince and the Dressmaker - by Jen Wang

5 out of 5 stars
Abby - 2 years ago
Love love and love this story!! We all will face moments in life where we will have to decide if we will do what is easy, or what is right. Having the courage to do what is right in the face of unspeakable evil, pain, and heartache is something that seems near to impossible. But we can know that God is right there with us every step of the way, we are never out of His sight or hands. He will give us His strength and peace in the midst of the chaos all around us. His faithfulness is sure and He will see us through. I received a copy from the publisher, all thoughts are my own.
2 guests found this review helpful. Did you?