The Pats - by Glenn Stout & Richard A Johnson (Hardcover) 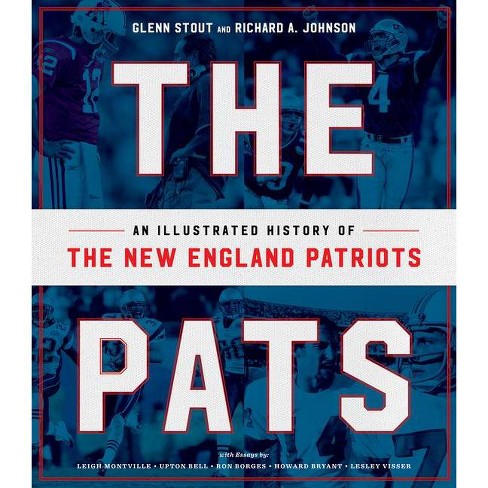 A gift for every fan: The definitive narrative history of the New England Patriots, illustrated with more than 200 photographs and including original sidebars and essays by Patriots chroniclers Leigh Montville, Upton Bell, Howard Bryant, Lesley Visser, and more.

A New York Times Bestseller The first book to tell the complete story of the Patriots, featuring thorough research, archival photos, and essays from notable authors, journalists, and local celebrities The New England Patriots have become a dynasty, though it didn't begin that way. Love 'em, hate 'em, the Pats have captured this country's attention like no other franchise. From two award-winning authors this is the first complete story of a legendary team and its five championship trophies. In the tradition of their celebrated illustrated histories of some of sports' most iconic franchises, Stout and Johnson tell the history in full and in colorful detail. This is a lavishly illustrated tale full of larger-than-life characters - from founding owner Billy Sullivan, early stars like Syracuse running back Jim Nance and beloved wide receiver turned broadcaster Gino Cappeletti, to Hall of Famers and stars like John Hannah, Russ Francis, and Steve Grogan through to present-day stars like Tom Brady and Bill Belichick and owner Bob Kraft. Featuring essays by Richard Johnson, Upton Bell, Leigh Montville, Howard Bryant, Ron Borges, Lesley Visser and more, The Pats is a must-have gift for fans, old and new, and an indelible portrait of the most talked about team in NFL history.

"Listen up, one and all: this is the book every Patriots fan has been waiting for. Glenn Stout and Richard Johnson are not merely writers of sport. They are legitimate sports historians. Big difference. It's all here, triumphs, warts and all, in exquisite detail. And it is spectacularly illustrated. You're not going to get this anywhere else. Hold all calls. we have a journalistic winner." --Bob Ryan, Boston Globe columnist emeritus and ESPN commentator "From Billy Sullivan to Bill Belichick--plus everything in between--the history of the Patriots is all here--the good, the bad, the ugly, and the ridiculously great. And there's the plain ridiculous, too, like the Pats game that was won by a fan who ran onto the field in street clothes and deflected a last-second foe's pass. The writing is so vivid that even folks who loathe all things New England and couldn't tell a Gronk from a grunt will be riveted. Who knew men as varied as Boston Catholic Diocese Cardinal Richard Cushing and beat pioneer Jack Kerouac were interwoven into the Patriots complex birth? From epic stadium plumbing issues to traffic jams, from hell to perhaps the oddest head coach in NFL history--the unstable Clive Rush--this history is a page-turner as great as the Super Bowls Tom Brady has won again and again." --Rick Telander, Sports Columnist, Chicago Sun-Times, author of Heaven Is A Playground and The Hundred Yard Lie "Comprehensive and both timeless and timely, this is a must-read for all hardcore Pats fans." --Chris Ballard, Senior Writer, Sports Illustrated and author of One Shot at Forever "Who knew that the remorseless victory machine we know today as the New England Patriots hit so many bumps and took so many tumbles along the road to glory? Glenn Stout and Richard Johnson celebrate the team where it's due, but they also chasten and chide, and bring in another half-dozen voices to vary the perspective. The Pats is a jubilee of anecdote and unlikelihood, with character after fascinating character dropped in--a book not just for the Patriots fan, but for anyone curious about pro football, New England, and how even the most apparently hopeless franchise can build a winning culture." --Alexander Wolff, author of The Audacity of Hoop: Basketball and the Age of Obama "Glenn Stout and Richard Johnson do so much more than explore the history of Boston sports. With their dazzling skill for looking beyond the box scores and scoring summaries, they whisk us back in time to old ballparks, long-ago games and the personalities who made Boston a dynamic sports town. What Stout and Johnson did for baseball with Red Sox Century they now do for football with The Pats." --Steve Buckley, Boston Herald "If you're a fan of great football or just great writing, you'll love The Pats. It covers the birth of football through the Pats' wilderness years to the current dynasty -- and everything in between -- with fresh insight, bite, and humor from an All-Pro roster of writers. The story of Tom Brady's unlikely ascension to the throne alone is worth the price, but this book also serves as a prism for the game itself. As captivating as a two-minute drill." --John U. Bacon, New York Times bestselling author of Endzone

"For those Patriots fans who feel as if they need a little football fix to get through halftime, a lively new book that tells the origin story of the Pats may be just the thing to pass the 12-minute break in the action."--The Boston Globe

"Even for fans who can't get enough of the New England Patriots, The Pats should either satisfy their voracious appetites or come mighty close. It's a richly illustrated, large-format book that is as generous in chronicling the team's modern success as it is in recounting its humble origins and many lean years."--Christian Science Monitor "The best sports book of 2018. Detailed, carefully crafted, filled with fun, facts, passion, timeless and fabulous photographs throughout, this book is a keeper."--BaseballReflections.com "The Pats takes fans on a wild ride that explores the multi-Super Bowl winning team's past, present and future . . . It is the first book to tell the complete story of the Patriots. The author's astounding research, archival photos, and essays from notable authors, journalists and local celebrities make for the single best work on the team."--The Sun (VT)

GLENN STOUT is the series editor of The Best American Sports Writing, the author of The Young Woman and the Sea and Fenway 1912, and has collaborated on Red Sox Century, Yankees Century, The Cubs, and The Dodgers. RICHARD JOHNSON is the curator of the Sports Museum of New England and the author of New England Patriots: Yesterday and Today.
If the item details above aren’t accurate or complete, we want to know about it. Report incorrect product info.