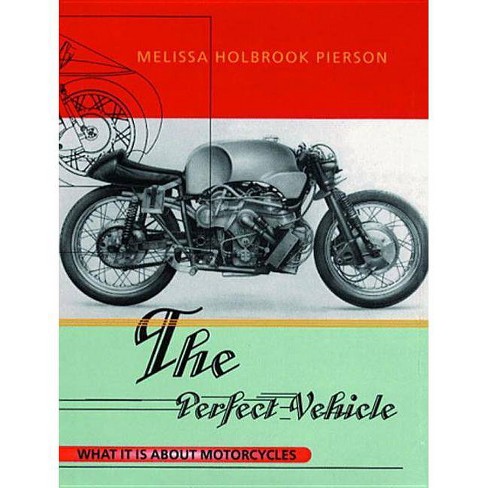 "This book, a polished, winding meditation on the theory and fractiousness of motorcycles, celebrates both their eccentric history and the wary pleasures of touring".--"The New Yorker". A selection from this book appeared in "Harper's". Photos.

In a book that is a must for anyone who has loved a motorcycle (Oliver Sacks), Melissa Pierson captures in vivid, writerly prose the mysterious attractions of motorcycling. She sifts through myth and hyperbole: misrepresentations about danger, about the type of people who ride and why they do so. The Perfect Vehicle is not a mere recitation of facts, nor is it a polemic or apologia. Its vivid historical accounts-the beginnings of the machine, the often hidden tradition of women who ride, the tale of the defiant ones who taunt death on the racetrack-are intertwined with Pierson's own story, which, in itself, shows that although you may think you know what kind of person rides a motorcycle, you probably don't.

The Perfect Vehicle uses motorcycles as a lens for examining risk, freedom, and most surprisingly, relationships between men and women. . . . Pierson comes through brilliantly, crafting her sentences with precision and a sure ear.--Ann Marlowe "Village Voice"

As Pierson tells us why she loves riding, many who share her passion will often feel themselves nodding, saying, 'Yeah, she caught it.'--Andy Solomon "Chicago Tribune"

This is an exceptionally sensitive and intelligent book.--Robert Pirsig
If the item details above aren’t accurate or complete, we want to know about it. Report incorrect product info.